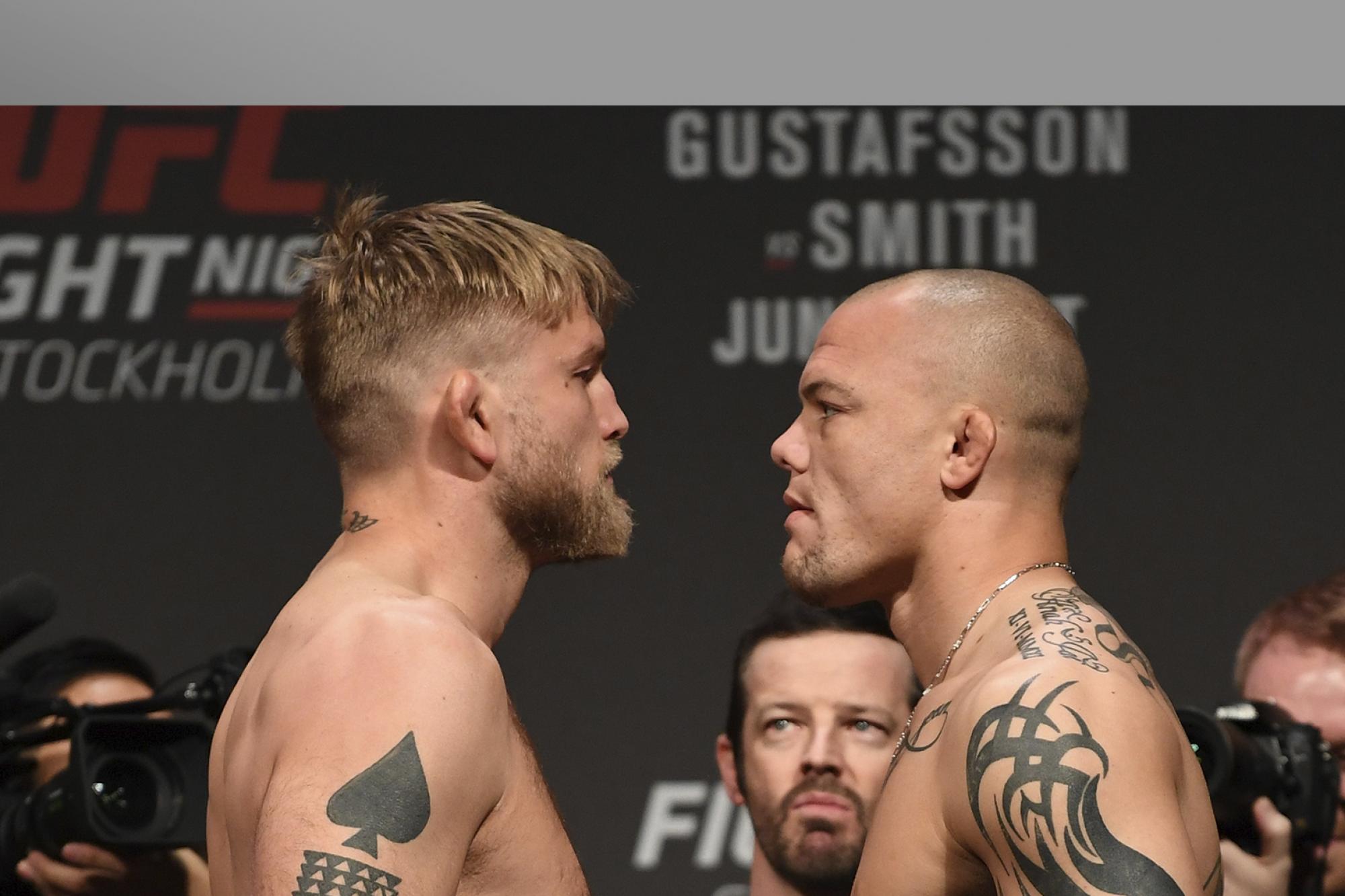 Belluardo controlled the action on the ground for much of the first round, with only a late triangle choke attempt by Alvarez getting the Spaniard on the board.

Alvarez came out firing for round two, and he landed some good shots before getting too aggressive, leading to another Belluardo takedown. But Alvarez responded well, and after reversing position, he began firing away with elbows. The strikes kept coming without response, leading to referee Rebin Saber’s halting of the bout at 2:22 of the second stanza.

Light heavyweight up and comer Devin Clark got back in the win column after a December loss to Aleksandar Rakic, as he scored a close, but unanimous, decision over Darko Stosic.

Clark opened up the scoring with a left to the jaw that staggered Stosic, and a trip to the canvas followed. Stosic defended well and got back to his feet by the midway point of the first frame, subsequently taking control against the fence until a spinning back fist by Clark stunned him again. With a minute left, Stosic got in some shots of his own against the fence, but he was breathing hard by the end of the round.

The pace dipped in round two, with neither fighter surging ahead until a slam by Stosic with under two minutes remaining. Thudding ground strikes followed, allowing the Serbian powerhouse to take the round.

Clark scored a takedown to start round three, but Stosic rose quickly and locked the Sioux Falls native against the fence for a brief spell. Clark got busier with his strikes as the round progressed, and while Stosic was always dangerous with his own powerful blows, Clark’s activity level proved to be the difference in the fight.

Stockholm’s own Bea Malecki delighted her hometown fans in bantamweight action, as the Ultimate Fighter veteran had a successful UFC debut thanks to a second-round submission win over fellow newcomer Duda Santana.

Santana had a good opening round thanks to a pair of takedowns and good control in the grapping exchanges, but a second round takedown attempt by the Brazilian ended up with Malecki on top and in mount. Santana gave up her back and Malecki went after a rear naked choke that she ultimately locked in, resulting in a tap out by Santana at 1:59 of round two.

Frank Camacho impressively snapped a two-fight losing streak in his return to the lightweight division, halting Nick Hein in the second round.

A change in scenery to California’s Team Oyama appeared to pay dividends immediately, as Camacho’s aggression was measured, not reckless. Camacho was particularly brutal with his kicks and punches to the body, and late in the second round, those body shots took their toll, with Hein finally starting to wilt. Camacho kept the pressure on, and while Hein tried to stay in the fight, eventually referee Leon Roberts had seen enough, and he stopped the bout. The official time of the stoppage was 4:56 of round two.

The remarkable unbeaten UFC run of 39-year-old Leonardo Santos continued, as he returned from nearly three years on the sidelines to knock out Stevie Ray in the first round.

Both lightweights spent the early part of the bout getting acclimated to each other, and while Ray seemed to be the first one to get comfortable, it was Santos ended matters, with a single right hand knocking Ray down and out in spectacular fashion. The official time of referee Marc Goddard’s stoppage was 2:17 of round one.

Malmo’s Lina Lansberg delivered her best UFC performance to date when it mattered, as she upset former Invicta FC champion Tonya Evinger with a shutout three-round unanimous decision win in a clash of bantamweight contenders.

Evinger locked up with Lansberg against the fence almost immediately, and though Lansberg used an elbow to cut her foe and get some brief daylight midway through the round, Evinger jumped right back in to pin her foe to the Octagon fence. Lansberg did reverse position with a minute left, though, and she scored a takedown that led to a ferocious ground-and-pound assault to end the round.

Evinger dragged Lansberg to the mat early in round two, but after some dicey moments, the Swedish vet got into the top position and began letting her strikes go again, clearly giving Lansberg the round.

In the third, Lansberg kept the heat on the Texan, leaving no doubt that she was the victor after 15 minutes of action were done.

Akman opened up his UFC career with a solid first round, patiently pressuring Khandozhko throughout out. And though the Russian was busy with his standup attack, the most telling blows were landed by Akman.

Khandozhko picked up the pace on his leg attacks in the second round, trying to slow the forward motion of Akman, but with a little under two minutes left, the Russian went upstairs with his punches to drop his foe. Akman recovered quickly and got back to his feet, proceeding to look for a takedown. He got the fight to the mat in the closing seconds of round two but was unable to capitalize.

The back and forth action didn’t let up in the final round, with both fighters doing whatever necessary to get the win. But when Khandozhko staggered Akman late in the third, it may have been the difference maker, as “Honda” took the victory via three scores of 29-28.

With the win, Khandozhko moves to 27-5-1. Akman, who replaced Bartosz Fabinski on short notice, falls to 6-1.

Teymur rocked Jo in the opening minute with a hard left hook, but Jo was able to shake off the blow. Teymur stayed aggressive, though, and with three minutes left, he had Jo on the mat. Jo nearly caught Teymur’s arm, and while he didn’t get the submission, he did work well enough to return to his feet, but not enough to take the round from “Kid Dynamite.”

Neither fighter landed much of note in a slow second round, and Teymur was visibly frustrated by Jo’s movement around the Octagon. Midway through the final round, Teymur got back on the board when he put Jo on the mat and it got the crowd back into the fight momentarily. Once standing again, Teymur landed a hard right hand and with those late surges, he was able to secure his first Octagon victory.

In a meeting of up and coming lightweights, Christos Giagos won a three-round unanimous decision over Damir Hadzovic.

Two minutes into the fight, Giagos (17-7) scored a big takedown, and while Hadzovic (13-5) got back to his feet, it was only for a moment, as “The Spartan” grounded his foe once again, and that control for much of the round put the first five minutes in his bank.

Giagos’ put his striking gear into gear in round two, and he wobbled Hadzovic on a couple occasions, setting up another takedown. Once the two rose to their feet, Hadzovic was clearly tired, but he found enough energy for a late takedown of his own.

Fatigue hit Giagos as well in the third round, but the Californian’s early lead was too much for Hadzovic to overcome, as Giagos took the decision via scores of 29-27 twice and 29-28.

Finald’s Makwan Amirkhani picked up his second consecutive victory in featherweight action, as he submitted England’s Chris Fishgold in the second round.

Amirkhani came flying out of the corner looking for a fast finish, but Fishgold was ready for him, and as the two settled in, it was Fishgold doing the bulk of the scoring with his kicks. With two minutes left, Amirkhani responded with a smooth takedown, but Fishgold stayed busy from his back as he looked for submissions.

Fishgold was having success on the feet in round two, but a low kick from Amirkhani brought a momentary halt to the action. When the fight resumed, Amirkhani attempted – and got – a takedown, ultimately slipping out of Fishgold’s choke attempt. Next it was Amirkhani’s turn to try for a choke, and while Fishgold gamely tried to escape, he was eventually forced to tap out to the anaconda choke at the 4:25 mark of round two.

Austria’s Aleksandar Rakic announced his arrival to the light heavyweight elite in the UFC Fight Night co-main event, knocking out longtime contender Jimi Manuwa in less than a minute to extend his current winning streak to 12.

After trading leg kicks to open the bout, Rakic went upstairs and ended matters emphatically, with his left kick to the head landing flush and putting Manuwa out before he hit the mat. There was no need for a follow-up from Rakic, as referee Kevin Sataki stepped in and stopped the bout 42 seconds into the opening round.

In his first appearance since losing a March title fight to Jon Jones, Anthony Smith responded to that defeat by scoring the biggest win of his career in the fourth round of the UFC Fight Night main event in Stockholm, submitting fellow light heavyweight contender Alexander Gustafsson in the Swedish hometown of “The Mauler,” stunning fans at Ericsson Globe Arena in the process.

Following the bout, the 32-year-old Gustafsson, a Swedish MMA pioneer, left his gloves in the middle of the Octagon, signifying the end of his stellar career.

"The show is over," said Gustafsson as he addressed his fans.

Gustafsson expended a lot of energy in the opening round thanks to lateral movement and fakes, but it did allow him to keep Smith at bay for much of the frame. Nebraska’s Smith got in some good shots as he stalked, even bloodying the Swede’s leg with a kick, but it was Gustafsson who landed perhaps the best shot of the round, a solid left hand late that got the attention of “Lionheart.”

The action heated up in the second frame, with Smith getting more aggressive, forcing Gustafsson to respond, but “The Mauler” really kicked his game into gear in the third, as he appeared to finally have a read on Smith’s rhythm. Now it was Smith’s turn to fire back, but his punches were doing little to slow down Gustafsson, who landed a kick to the body and then scored a big takedown with 40 seconds left in the round, drawing a roar from the crowd.

Getting busy again in the fourth, Smith’s strikes led to a trip to the mat, and the American took Gustafsson’s back. Gustafsson tried to shake Smith off, but Smith put him back down and fired off hard strikes before sinking in the rear naked choke that forced Gustafsson to tap out at 2:38 of round four.