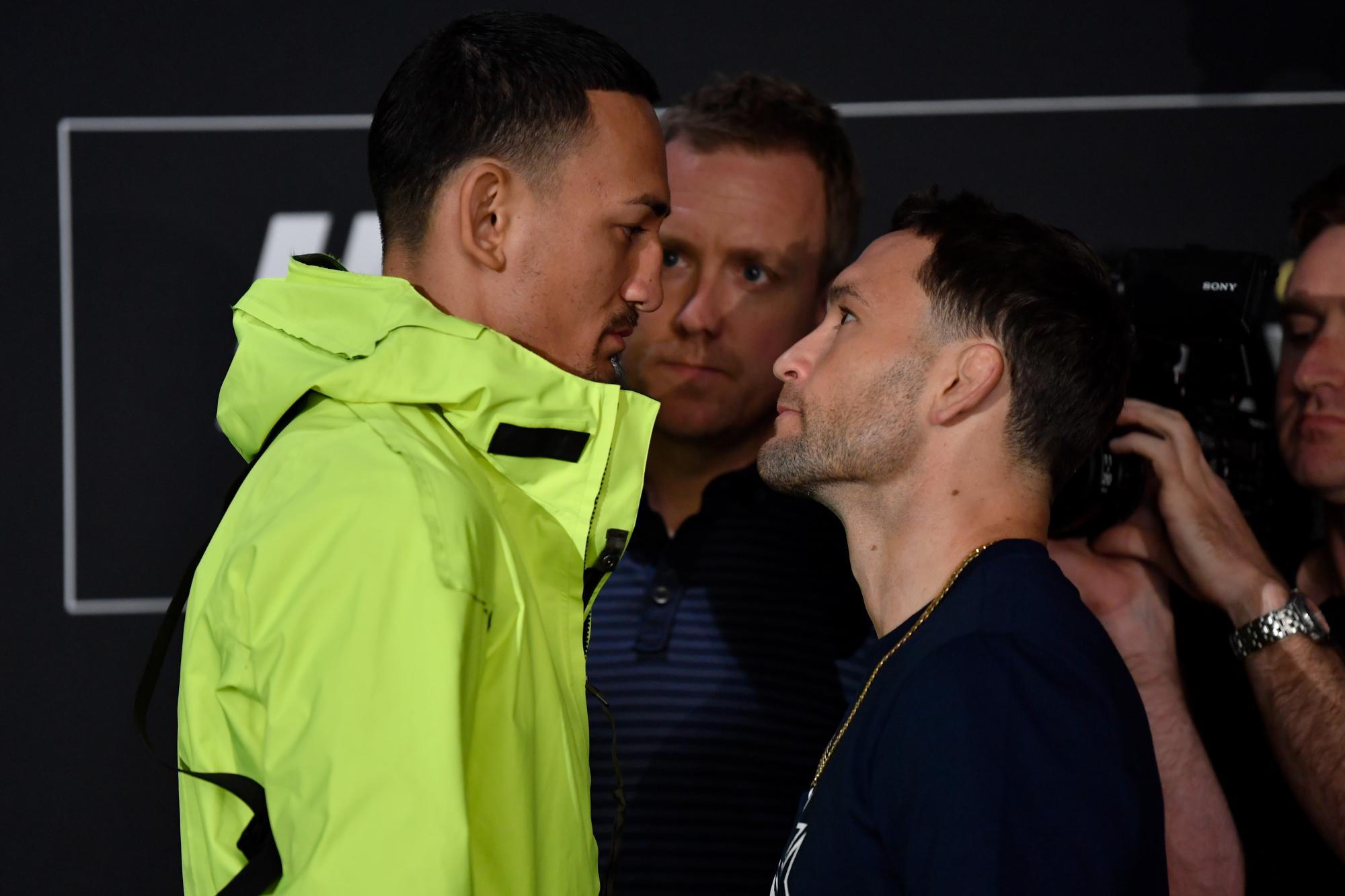 Former featherweight and lightweight Erik Koch made a successful debut at 170 pounds, as he won a three-round unanimous decision over Kyle Stewart in the opener.

Koch got off to a strong start with this striking in the opening round, but ultimately the bout settled into a pattern of clinch work against the fence, with Stewart holding his own but unable to put together any significant offense on a consistent basis. Meanwhile, it was Koch staying a step ahead wherever the bout traveled, whether on the feet, in the clinch or on the mat, allowing him to leave the Octagon with the win via scores of 30-27 and 29-28 twice.

Social Post
Gillian Robertson def Sarah Frota by TKO at 4:13 in Round 2

Niagara Falls’ Gillian Robertson earned the first knockout win of her career in her first pro bout in Canada, as she halted Brazil’s Sarah Frota in the second round.

Robertson got a takedown in the first 30 seconds, setting up a ground battle between the two grappling standouts. Frota nearly locked in a reverse triangle from the bottom, but Robertson got free, and in the final minute “The Savage” was able to land some strikes that cut the Brazilian.

It was another trip to the canvas for the flyweights early in the second, with Robertson working her ground strikes before getting into the mount with two minutes left. And once there, a series of unanswered strikes brought an end to the bout, with referee Kyle Cardinal stepping in at 4:13 of round two.

Brazil’s Deiveson Figueiredo bounced back from the first loss of his career to Jussier Formiga in impressive fashion, as he shut out fellow flyweight contender Alexandre Pantoja over three rounds.

Figueiredo was in charge from the start, with his striking game on point throughout. Pantoja got marked up by his compatriot, but he stayed out of serious trouble as he looked to take the fight to the mat, a wish that went unfulfilled.

Pantoja began to get his licks in on the feet in round two, and with under two minutes left, he got his takedown, only to see Figueiredo jump up without any issue. In the final minute, the exchanges heated up, with Figueiredo making a late statement with a knockdown and ground-and-pound attack.

“Deus da Guerra” really took over in the third round, as his elbows cut Pantoja and he even tossed in a takedown for good measure as he locked up the victory via identical scores of 30-27.

Social Post
Gavin Tucker def Seungwoo Choi by submission due to a Rear Naked Choke at 3:17 at Round 3

Nova Scotia’s Gavin Tucker earned his Brazilian Jiu-Jitsu black belt during his nearly two years on the sidelines, and he broke it in against SeungWoo Choi, as he submitted his foe in the third round of their featherweight bout.

Tucker took the fight to the mat early, and as Choi scrambled, he took his foe’s back briefly before the two stood. Tucker kept looking for the takedown, but Choi defended well.

Continuing to work his wrestling effectively in the second, Tucker nonetheless lost a point when he landed an illegal knee to the head of the grounded Choi, a costly deduction in a close fight. But Tucker removed the judges from the equation in the third, as he locked in a rear naked choke that forced Choi to tap out at 3:17 of the final frame.

Social Post
Hakeem Dawodu def Yoshinori Horie by TKO at 4:09 in Round 3

Calgary’s Hakeem Dawodu made it three in a row in featherweight action, as he stopped Japanese newcomer Yoshinori Horie in the third round.

Horie’s movement and unorthodox attack kept Dawodu off balance throughout the first round, and it led to the Tokyo product landing some flush shots on the surprised Canadian. Dawodu began to time Horie in the second, and as Horie slowed, Dawodu got back in the driver’s seat. In the third, a knee to the body stunned Horie and Dawodu stepped on the gas in an attempt to finish the fight. Horie gamely hung on for as long as he could, but when a left kick to the head put him on the seat of his pants with a little less than a minute left, referee Kyle Cardinal decided that he had enough, halting the fight at the 4:09 mark of round three.

After an impressive UFC debut at bantamweight, Viviane Araujo kept the momentum going at 125 pounds, as she beat veteran flyweight contender Alexis Davis via unanimous decision.

Araujo’s stick and move strategy worked well for her in the opening round as she marked Davis’ face up, but it also emptied some of her gas tank, a reality that played into Davis’ favor in the second, as she delivered a heavy dose of ground-and-pound to the Brazilian to even things up. But with the fight on the line, Araujo stepped up and got her second wind, as she went back to her striking to take the third round and the fight.

In the main card opener, Polish middleweight Krzysztof Jotko made it two straight wins as he took a three-round split decision over Quebec’s Marc-Andre Barriault.

Jotko tried to wear his opponent down with clinch work in the opening round, but Barriault adjusted well and had more than his share of positive moments, including a slam to the mat in the closing 30 seconds of the round, even though he lost position as Jotko got into the top position before the two rose.

Barriault did score with some solid shots in the second frame, but the busier and more effective fighter remained Jotko, who largely controlled where the fight took place, and he continued to do so in the third round, allowing him to leave the Octagon with the close win.

The knees of Aubin-Mercier jarred Tsarukyan in the early stages of round two, keeping his standup success going, but the Russian took it well and rebounded with some strong moments through the rest of the frame.

Tsarukyan (14-2) got his takedown in the second minute of the final round and he kept OAM grounded for the rest of the round, and that strong finish proved to be the deciding factor as he earned the victory via three scores of 29-28.

Social Post
Geoff Neal def Niko Price by TKO at 2:39 in Round 2

Expected to deliver some of the best action of the night, welterweights Geoff Neal and Niko Price didn’t disappoint, as they battled it out until Neal stopped Price in the second round.

It was no shocker that Price had success on his feet in the opening round, but what did surprise was that Neal had his best success with his grappling, which produced two takedowns. But the big takeaway from the first stanza was the kick with less than two minutes left that stunned Neal briefly.

A fistfight broke out in round two, with Price holding the edge before the two tumbled to the mat. Neal ended up in the top position after escaping a guillotine choke, and his subsequent ground strikes bloodied and stunned the Floridian. After a few more unanswered blows, referee Dan Miragliotta stepped in and stopped the fight. The time of the stoppage was 2:39 of the second round.

Former featherweight champion Cris Cyborg returned to the win column in the UFC 240 co-main event, as she held off a spirited effort from Canada’s Felicia Spencer to take a shutout three-round unanimous decision.

Spencer went after Cyborg aggressively to start the bout, and after some solid exchanges, she cut Cyborg with a flush elbow before clinching with the former champ. Cyborg got loose and fired off hard shots at her foe, but Spencer took them well. As the pace slowed, Cyborg began chopping at Spencer’s legs with her kicks while mixing in punches upstairs. When the two clinched again, Cyborg landed knees to the body, capping off the round.

Appearing to be winded as round two got underway, Cyborg continued to be pressured against the fence by Spencer, who pulled guard in the second minute. It was a risky move, but Spencer was able to dodge serious danger as Cyborg tried to press her newfound advantage. With two minutes left, Cyborg waved Spencer back to the feet, and she was able to keep the Canadian at bay with a disciplined standup attack.

In the third, Cyborg had her best round of the fight, as she kept the pressure on with her striking attack while Spencer was unable to get her grappling game in gear, allowing the Brazilian to emerge with the win via three scores of 30-27.

Honorary Canadian Max Holloway won his 14th straight featherweight fight at Rogers Place in Edmonton on Saturday night, as he outpointed Frankie Edgar over five rounds to retain his 145-pound crown in the main event of UFC 240.

Scores were 50-45 twice and 48-47 for Holloway, who returned to 145 pounds after losing an interim UFC lightweight title fight to Dustin Poirier in April.

The first five minutes were largely tactical, Edgar scoring with a few right hands and some leg kicks, while Holloway’s weapon of choice was an uppercut that landed on a number of occasions.

Holloway’s takedown defense continued to be strong in round two, as he turned away Edgar’s second attempt to take the fight to the mat, and the champion appeared to be digging in with his shots a little more, particularly to the body. Edgar kept pressing, but he was beginning to have trouble getting past Holloway’s jab, and just before the horn, the Hawaiian sent Edgar into the fence with a body kick.

In the third, Edgar picked up his lunch pail and went to work, staying busy throughout. Holloway did appear to stun Edgar with a little over a minute left, but moments later, “The Answer” scored his first takedown, allowing him to finish the round on a positive note.

Edgar had success with his busy striking attack in round four, but Holloway was still landing the more telling blows, and when he upped his work rate late in the frame, the power difference was clear and it showed on the New Jersey native’s bloodied face.

Holloway’s jab and takedown defense continued to dictate the action in the final round, with Edgar pressing but unable to do significant damage to the champion. As the bout entered its closing moments, Edgar never stopped trying to make something happen, but it was not to be, as Holloway made it 4-0 in Canada.