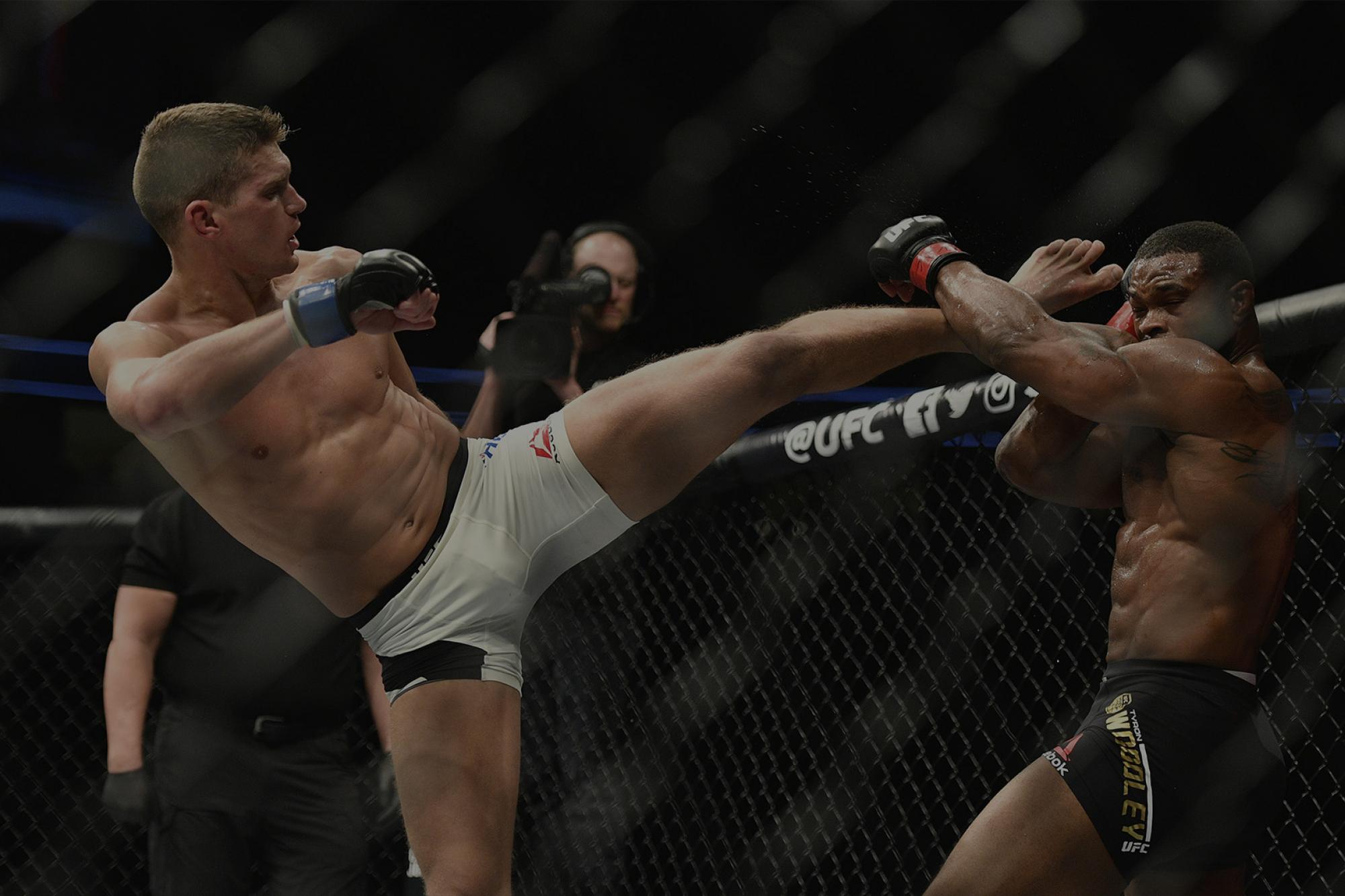 And when he goes to war with Anthony “Showtime” Pettis this Saturday at UFC Nashville he will be doing just that.

Pettis is making the move up to welterweight after spending years at featherweight and lightweight. When Pettis made the decision to head up to 170lbs he called for a fight against Thompson and “Wonderboy” was more than happy to oblige the former champion.

“It’s going to be a barnburner I’ll tell you that,” Thompson said. “Anthony Pettis is game. That guy is always game. I don’t know if you saw his last fight with Tony Ferguson but they were both bleeding and him sitting there just smiling looking at the camera like ‘this is what I live for’ and those are the kind of people I like to fight. I like to step across the cage and trade leather with.”

Thompson hasn’t fought since last May, when he lost a close decision to recent title challenger Darren Till in Liverpool, England. Early in his fight with Till he injured his knee and had to spend months rehabbing. At 36 years of age, Thompson takes his recovery very seriously and believes that both his mind and body are ready for the challenges that Pettis presents.

“I got a small window to kind of do what I want to do and make sure my knees are healthy,” Thompson said. “So like three months after the fight my knees were actually great, so they are feeling good right now and ready to kick somebody in the head.”

Once the Octagon door closes behind Thompson and Pettis fight fans can expect a striking clinic, one that Thompson eagerly awaits.

Hear from Stephen Thompson before his fight against Anthony Pettis this weekend about why the welterweight loves to fight.

UFC: What was it like to rehab from yet another knee injury and how are you feeling now that camp is over?

ST:  So I ended up injuring my MCL in the first round or second round of the Till fight, which was like ten months ago so I was out for two or three months just for that. You know, I’ve had four knee surgeries on my left knee two on my right, so for some reason this just forever to heal. But everything is great right now. I got my strength and conditioning coach building the knee back up, doing my strength and condition and doing my physical therapy. That’s something that I still do every day just for fear, I’m 36 years old.

UFC: The welterweight division looks very different than it did when you fought Till last. How do you feel about the state of the division?

ST:  The welterweight division is where it’s at to be honest with you.  I mean you had a little hold-up because there was a little debacle between Colby Covington and Kamaru Usman, who was going to get the title next. So everybody was kind of on hold to see if they were going to be that next guy. We’re in a division that I think is more stacked than any other division in the UFC. I mean you got Ben Askren in the mix now who just fought Robbie Lawler, a great fight, a controversial win off of that. Now you got these 155lbs coming up to our division like Michael Chiesa, who just submitted Carlos Condit. And of course “Cowboy” Cerrone and now you got Anthony Pettis coming up to the welterweight division and calling me out. Man it’s exciting, which is why I think the welterweight division is THE division in the UFC. It’s the most exciting division I think.

UFC: Anthony Pettis said he is a fan of your style and what you bring to the Octagon. What does that mean to you?

ST: That is the coolest thing man. To be honest with you, I’ve been a fan of Anthony Pettis for a while now as well. I mean, we have a very similar style in him being a taekwondo stylist, me being a karate guy. I’ve always been a fan of his exciting fights and style man. I mean who walks across a cage and kicks somebody in the face? You know, who does that? That’s like something you see in the matrix or in anime and I’m a huge anime fan so of course I’m going to be a fan. So yeah man this is definitely a fan fight and what better guy to do it than somebody I like to watch fight.

UFC: What does it say about you that you’re willing to take on the best fighters, no matter the circumstances?

ST: That’s why I do what I do. I’m in this game, not for the money and not for the fame but just to face against the best fighters in the world. When I’m talking to my grandkids years from now just to say that I’ve battled with the best fighters in the world, I mean who can say that? That’s freaking awesome. That’s something you’d see like I said, in an anime or something. That definitely puts a smile on my face. That’s just who I am, I’m in the game and will face anybody just because that’s just what I love to do. I want to face the best, I want to prove not just to my fans in the UFC but to myself, that I should be in the Octagon with these people.

UFC: What are some of the keys to victory for you against Pettis?

ST: The goal is to use my wrestling and jiu jitsu to keep the fight standing which has always been my passion. I’ve come from a karate background and I’ve spent many years doing kickboxing and people want to see some body get knocked out. I know that people are getting more educated with the UFC and they’re starting to understand the ground game but, people want to see some body get put to sleep. I mean like this past weekend you saw (Jorge) Masvidal knockout out (Darren) Till and everybody was like “what in the world”. I mean it’s just something different getting a knockout than a submission, you know a submission the guy taps it’s over OK submitted the guy. But when you knock the guy out it’s like “woah” and that’s what fans want to see and what I want to bring ‘em.”

The main card for UFC Fight Night – Thompson vs. Pettis starts at 8pm/5pm ETPT on ESPN+. Make sure you tune in to find out if Thompson can spoil Pettis’ welterweight debut.