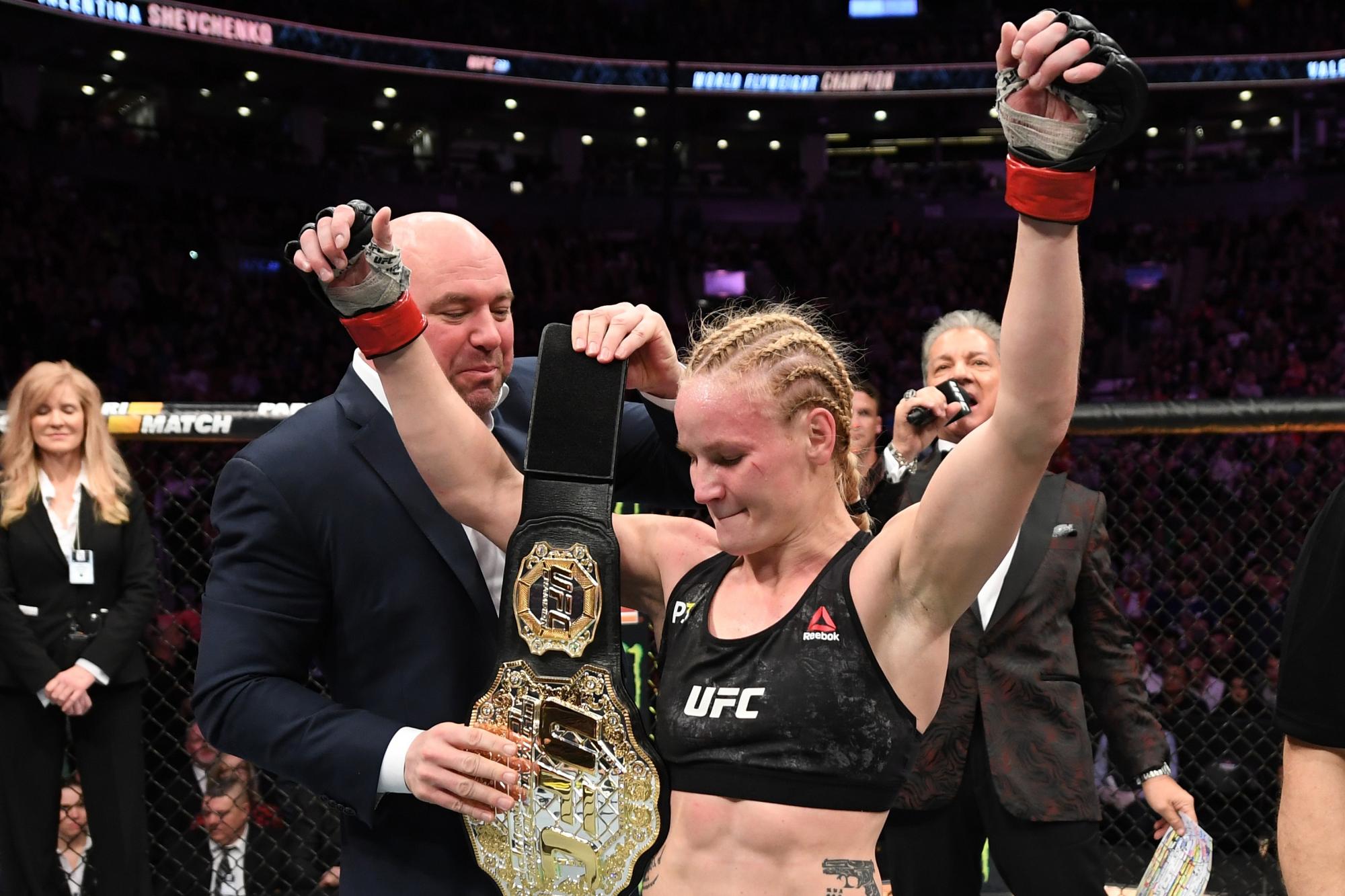 Taking place at UFC 238 in Chicago, her fight with Jessica Eye also stands as the first women’s flyweight title defense in the promotion’s history, sandwiched by “the people’s main event” between Tony Ferguson and Donald Cerrone and UFC 238’s main-event bout featuring Henry Cejudo and Marlon Moraes for the vacant bantamweight title.

Shevchenko has operated, fought like and conducted herself with a champion-type aura since she made her UFC debut in 2015. She came close to the bantamweight belt in 2017 when she lost a split decision to Amanda Nunes. More than a year later against former strawweight champ Joanna Jedrzejczyk, she got her title via a unanimous decision at UFC 231.

The moment the belt was draped over her shoulder in Toronto, it seemed like her championship status was inevitable all along for the lifelong martial artist. Keeping with her laser-focused approach, Shevchenko isn’t caught up in her newly minted status as the flyweight champion.

“I want to keep this belt as long as I can,” she told UFC.com. “It’s very serious. Of course, being the champion, it gives you a lot of responsibility.”

The first fight-related responsibility comes at UFC 238 when she takes on Eye, who has been clamoring for a flyweight division – and a flyweight title shot – for what seems like longer than anyone else on the roster. In a sport littered with chip-on-the-shoulder-types, Eye is chief among them, and in Chicago, she isn’t so much trying to quiet doubters in this fight as she is welcoming the noise that comes with being a big underdog.

“It’s another fight,” Eye said. “It’s obviously the fight I’ve always wanted my whole life. Everybody dreams for a title fight, but why am I going to add any more pressure on myself than what I need to, that’s already there? So I just kind of let it go. It’s just another fight that I get to finally fight, and I’m doing what I love, and as long as I’m healthy and happy, then I know the fight is going to happen.”

A tricky tidbit in both fighters’ preparations is they’ve crossed paths regularly leading up to the fight as they both have trained in Las Vegas and spent regular time at the UFC Performance Institute. That choice isn’t as much of a shocker for Shevchenko, as she and her sister, UFC flyweight Antonina Shevchenko, regularly move their camps.

For Cleveland-bred Eye, however, the move to Vegas happened relatively quickly. Despite training at Strong Style in Ohio for the better part of 13 years, according to her, the decision to move to the desert hasn’t distracted from training. Come fight night, she expects to be in the exact right mindset as she walks to the Octagon in the United Center.

Shevchenko is heavily favored in the fight (Bovada currently has Shevchenko as a -1400 favorite), but the Kyrgyzstani–Peruvian fighter isn’t letting her stature get into her mentality whatsoever.

“You can have all these high accolades, but if you haven’t fought people with high accolades too, then what does that say about you?” Eye said.

Both fighters simmer just above the brim with their confidence, allowing respectfully verbal jabs to come out in small bunches. Eye, as it’s she’s become known, carries an unblinking amount of confidence in herself, and is always willing to remind everyone of that confidence. Going five rounds with one of the most respected and technical strikers on the roster doesn’t bristle at her at all, and Eye feels like it’s bad news for Shevchenko.

“Knowing that we got five rounds, I feel like five rounds, for me, is better,” Eye said. “I’m a slow starter. I’ve known that about myself. To go all five rounds, it’s a terrible place to be with me because I want to drag someone into those late rounds, but we’ll see.

“I definitely love the fact that it’s going to be five rounds because I’m either going to finish it in the first or we’re going to get a five-round ass beating.”

Shevchenko won’t go easy, though. Her claiming of the flyweight title felt like it carried a long rein on top with it. This first title defense would lay a foundational piece to building her stake as the queen of a division that finds itself growing quickly with deep and young talent.

“At first, the goal was to become champion,” Shevchenko said. “Then, (the goal) is to defend the belt (as) many times as we can, so now, we are making the first step, and of course for me, any fight, it doesn’t matter what fight, any fight, it is number one and my number one priority.”