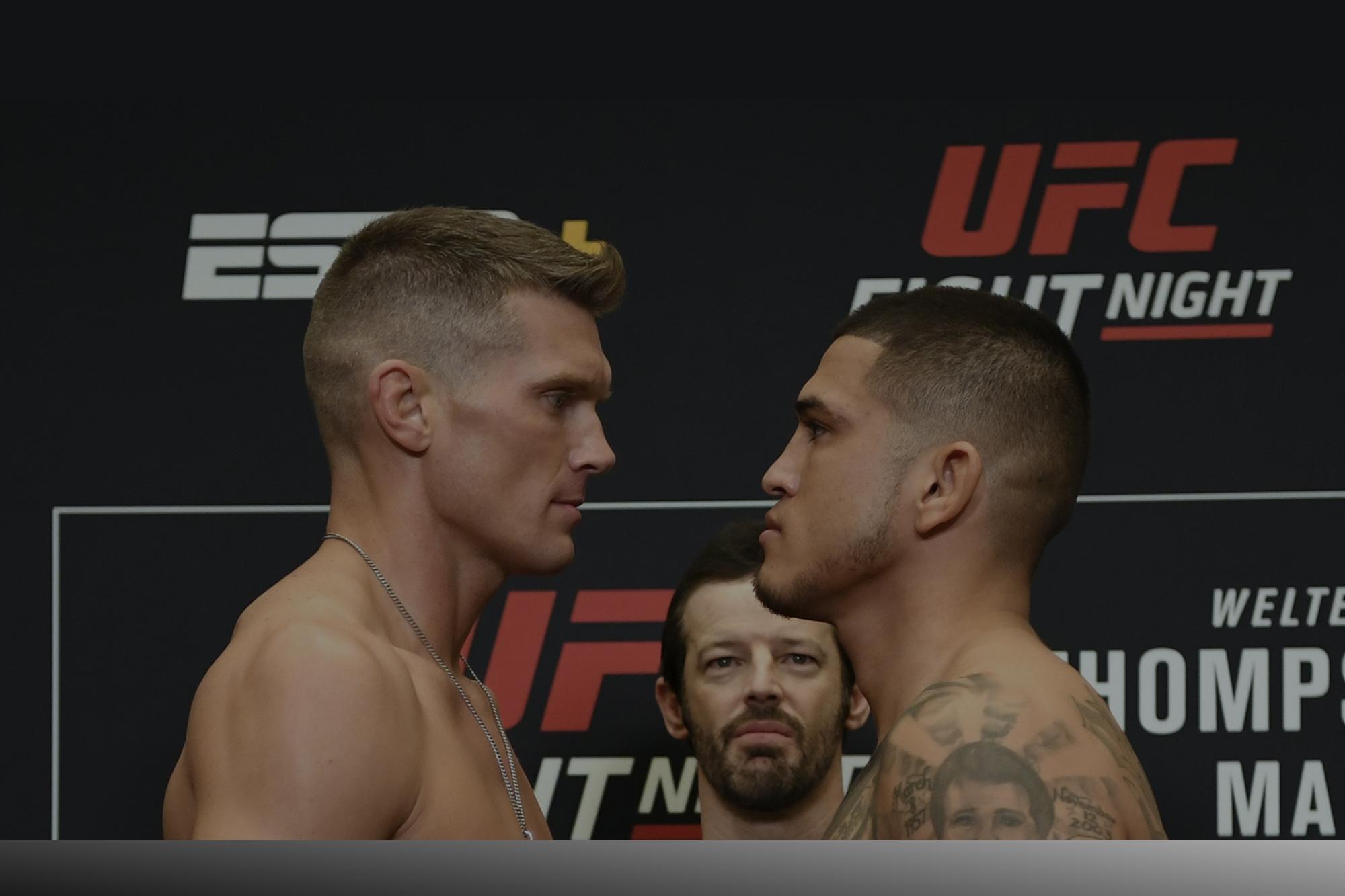 Moving in and out with ease, Espinosa’s first round in the UFC was a good one, as his speed and quick offensive attacks kept Shelton from getting any of his own offense in gear.

Espinosa got a takedown late in the second round, but up until that scoring move, Shelton had started to get into the fight with some solid work during exchanges, and while the third round was back and forth throughout, when the final horn sounded, it was Espinosa getting the nod on the scorecards.

It was a lot different situation the second time around for bantamweight Chris Gutierrez, who nabbed his first Octagon victory in impressive fashion, shutting out previously unbeaten newcomer Ryan MacDonald over three rounds.

Gutierrez was busy throughout the first round, and his volume striking left MacDonald with few openings to counter. A strike at the end of the frame bloodied MacDonald, and the cut got worse as the second stanza opened. Add in the bruised leg from Espinosa’s kicks and MacDonald was digging himself a deep hole on the scorecards. The Nebraskan tried to score a trio of takedowns late in the round, but Gutierrez’s defense was solid.

The third was more of the same, as Gutierrez’ pinpoint strikes continued to batter the ultra-tough but outgunned MacDonald.

Randa Markos delivered the most impressive victory of her UFC career in strawweight action, as she submitted TUF 20 castmate Angela Hill in the first round.

After using a flurry of strikes to put Hill on the defensive, Markos got the takedown in the second minute of the opening frame, and from there it was just a matter of time until she broke through her opponent’s defenses and locked in the armbar that forced Hill to tap out at 4:24 of round one.

Not surprisingly, it was a match of grappler (Davis) vs striker (Maia), and while Davis had her moments of control, when Maia was able to stay at distance, she lit her foe up with accurate strikes.

After catching a Maia kick in the second minute of round two, Davis got her first takedown of the fight and went to work from the top position, where she remained until the horn.

With the fight seemingly up for grabs, both 125-pounders let their hands go in the final round, with back and forth action the recurring theme of the last five minutes. And when the dust cleared, it was Maia earning her first UFC victory by three scores of 29-28.

Bantamweight up and comer Marlon Vera made it three straight finishes in his bout with Frankie Saenz, halting the Arizonan in the first round.

Vera took a little time to settle into the fight – about a minute – before a flush jab put Saenz on the deck. Vera didn’t waste any time following up, with a series of ground strikes prompting referee Jimmy Neely to stop the fight at the 1:25 mark of round one.

Arkansas’ Mitchell (11-1) drew first blood in the second minute of round one as he landed a left that jarred Moffett (14-4). Moffett’s legs wobbled, but he went all-in for a takedown and ultimately got the fight to the mat. Mitchell stayed busy from the bottom, quickly going for a triangle choke and then an armbar before Moffett got free and back to his feet.

A couple takedowns and a choke attempt served Moffett well in the second stanza, but Mitchell did some solid groundwork down the stretch to keep it close.

The takedowns kept coming for Moffett in round three, but with a little over a minute left in the fight, Mitchell took his foe’s back and nearly sunk in a fight-ending choke, but again, Moffett got loose and rose to his feet just before the final horn.

After a tough first round, unbeaten 20-year-old phenom Maycee Barber settled in and stopped JJ Aldrich in the second, making her UFC flyweight debut a successful one.

A stiff left hand from Aldrich put Barber on the canvas in the first 30 seconds, but Barber shook it off and got back to her feet. And while Barber was aggressive with her striking attacks, Aldrich’s counters were finding their mark consistently, making it a good round for the Westminster product.

Barber was a different fighter as round two began, and she began battling Aldrich on even terms. Then “The Future” landed a left that rocked Aldrich, and as she pursued her foe, she hurt her again, forcing Aldrich to cover up. As the blows rained down, referee Keith Peterson stepped in, with the official time of the stoppage coming at 3:01 of the second round.

The Ultimate Fighter alum Luis Pena got back in the win column in featherweight action, with “The Violent Bob Ross” taking a three-round unanimous decision over Steven Peterson.

Peterson raced out of his corner as the fight began, missing wildly before locking Pena up against the fence. Pena snatched Peterson’s arm to get free but the Texan nearly snagged his own armbar as the two battled on the ground. As the two rose, Pena, who came in at 148.5 pounds for the bout, rattled Peterson with some strikes, and he was in control as the round came to a close.

After an inspired talk from coach Sayif Saud between rounds, Peterson came out fast again for round two and he scored a brief takedown before Pena got loose and began tagging his foe. Peterson kept pressing, though, with the result being another takedown. Whenever given some daylight, Pena would flurry, and his strikes were hitting their mark.

The third was another back-and-forth one, both fighters having their moments, but the biggest shot likely being a kick to the head by Pena that forced Peterson into a clinch as time wound down.

The first round was all Formiga, and the reason was simple – his grappling, which allowed him to control the location of the bout while avoiding the striking thunder of his foe.

Getting a little more aggressive, Figueiredo looked to get back into the fight in round two, only to get taken down in the second minute of the frame. An elbow from the bottom by Figueiredo did open a nasty cut on Formiga, and that was ultimately the most significant scoring blow of the round, setting up an interesting dilemma for the judges as the fight entered round three.

Figueiredo’s spirit was willing in round three, but he was unable to deal with the grappling of Formiga, who was able to remain in control until bout’s end, allowing him to extend his winning streak to four via scores of 30-27 and 29-28 twice.

It wasn’t a classic, but lightweight veteran John Makdessi got the win, as he decisioned Peru’s Jesus Pinedo over three rounds.

There was precious little action in the first round, with neither fighter taking too many risks as they tried to find their range. This didn’t sit well with the Nashville crowd, which made its thoughts known.

Nothing changed in the second, with Makdessi content to peck away at his opponent’s legs with kicks. In the final 30 seconds, Pinedo surged, landing a kick to the head, but it may not have been enough for him to take the round.

There was another burst of action in the closing seconds of the final round, but not enough to please the crowd, which also groaned as Makdessi was awarded the win via scores of 30-27 twice and 29-28.

Heavyweight contender Curtis Blaydes got back in the win column following a November loss to Francis Ngannou, shutting out Justin Willis over three rounds in the UFC Nashville co-main event.

Making no secret of his game plan to get the fight to the mat, Blaydes got Willis down a minute in, and he went to work wearing his foe down. Willis made it to his feet, only to get thrown back to the mat moments later. This was repeated twice more, with Willis simply unable to get loose.

Blaydes opened the second round with a big right hand and then came the inevitable takedown and control on the mat and against the fence for the rest of the round. And while Willis had to know he was behind on the scorecards, there would be no miracle comeback for “Big Pretty” in the final frame, as Blaydes easily took the decision by scores 30-27, 30-26 and 30-25.

Anthony Pettis has been to the top of the lightweight division. Yet on Saturday night, it looked like the best might be yet to come for “Showtime” at welterweight, as the former world champion scored a highlight reel second-round knockout of Stephen Thompson in the UFC Nashville main event at Bridgestone Arena, announcing the arrival of a new contender at 170 pounds.

Refusing to let Thompson work at range, Pettis began walking his foe down as soon as the fight started, trying to stay close. Thompson was unbothered by the pressure, though, and he was busy with his kicks. Pettis tried to work the body with his kicks to slow Thompson down, and he was having success, but it was the work rate of “Wonderboy” that bloodied Pettis’ nose and took the round.

Pettis began going after Thompson’s legs in round two, and in response, Thompson began focusing on his hand attacks, as he whipped in a series of jabs and combinations upstairs. Yet just when it seemed like Thompson was the fresher of the two heading into the end of the round, Pettis stunned Thompson and the crowd with a flush right hand Superman punch that put the South Carolina native down hard. Two more right hands followed, with referee Herb Dean stepping in to stop the fight at 4:55 of the second stanza.