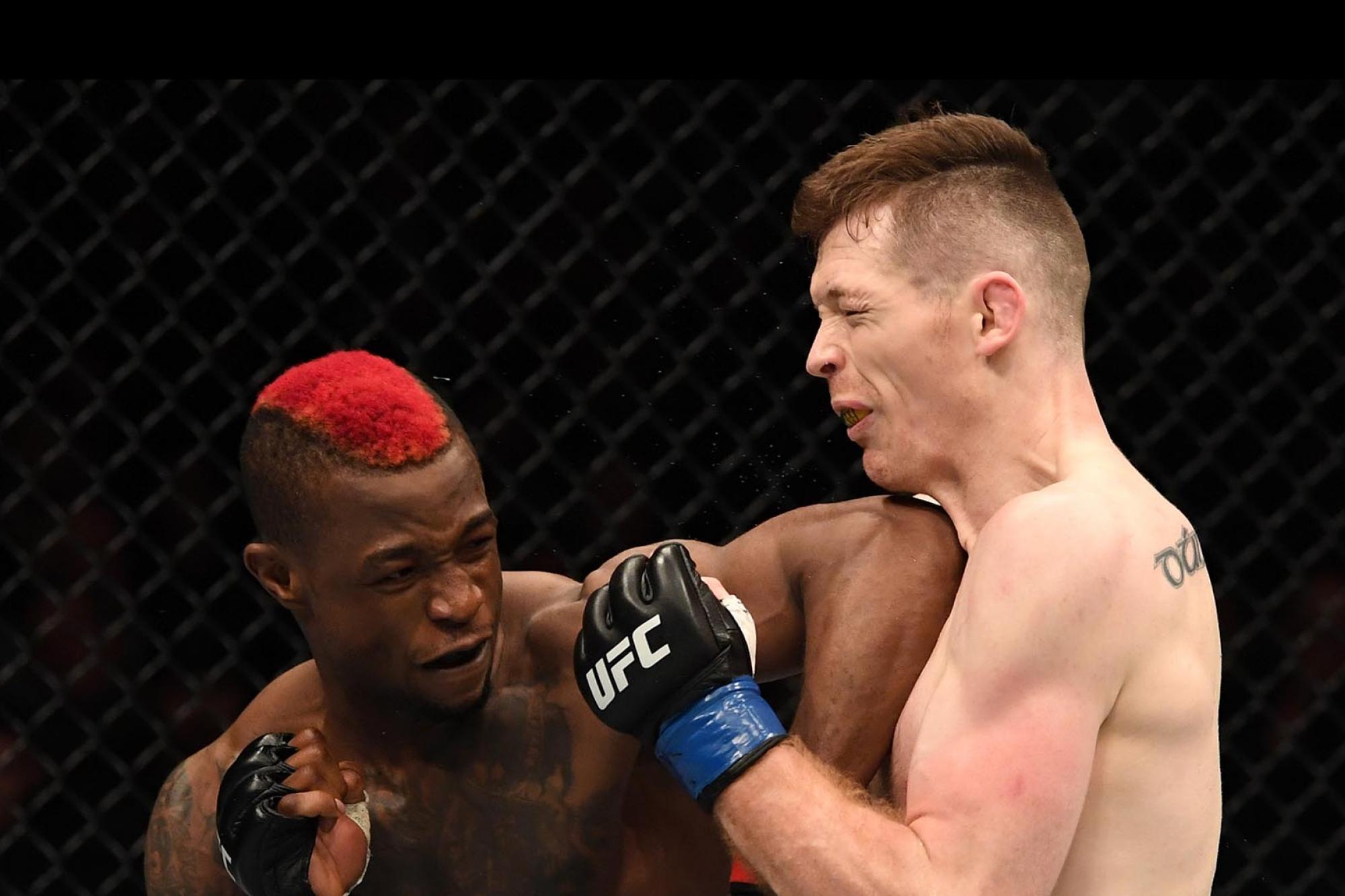 The card opened with a clash of British featherweights, and it was Wigan’s Mike Grundy nabbing a win in his Octagon debut, as he stopped Bristol’s Nad Narimani in the second round.

Grundy was apparently unaffected by the first-time UFC jitters in the first round, as his striking was sharp. And when you add in a takedown with 90 seconds left, it was a clear frame for the former British national team wrestler.

Narimani hung tough, though, and with a little over a minute left in round two, he rocked Grundy with a right hand. Grundy wobbled, but a few moments later, he dropped Narimani with a left hand. Narimani rose, but as Grundy chased him around the Octagon and landed more shots, referee Dan Movahedi had seen enough, calling a stop to the bout at 4:42 of the second frame.

The bout was competitive on the feet in the early going, with McCann holding a slight edge, but once the two went to the mat with a little over two minutes left, “Meatball” Molly dominated, nearly sinking in an arm triangle and then an armbar before finishing up the round with some ground strikes.

McCann opened up the second with a big right hand, but Cachoeira took it well, and that was the story of the round – McCann controlling the standup action while Cachoeira kept moving forward, refusing to back down.

In the third, fortunes started to change for Cachoeira when McCann’s left eye suddenly shut completely, and the Brazilian began landing more shots as McCann went on the defensive. With a minute left, referee Rich Mitchell had the doctor check on the eye, but she was cleared to continue, and McCann finished strong, capping off a bout she won’t likely ever forget.

The win was the first from an English woman in UFC history.

Featherweight up and comer Dan Ige made it three straight wins, as he submitted Scotland’s Danny Henry in 77 seconds.

After a brief feeling out process, Ige closed the distance and rocked Henry, sending his foe to the fence. The Hawaiian tried to finish the fight with his fists, but when that didn’t happen, he got the bout to the mat and sunk in the rear naked choke that forced the Edinburgh product to tap out at 1:17 of the opening round.

The third time was the charm for Russia’s Saparbeg Safarov, who bounced back from an 0-2 start to his UFC career to win bout number three, outpointing Romanian newcomer Nicolae Negumereanu over three rounds.

Safarov was in control from the start thanks to his grappling, but his continued grabbing of the fence cost him a point from referee Leon Roberts. After the point deduction the bout went back to the feet, but Negumereanu was unable to seize any momentum for himself before the end of the round.

Safarov remained in control in the second round, with another series of fence grabs allowing him to get loose from a second leg lock attempt from Negumereanu. This time there was no point deduction, and Safarov was able to get free and proceed to deliver some hard ground strikes, swelling up Negumereanu’s eye. As the round closed, more strikes battering Negumereanu’s face, putting him on the verge of a stoppage.

Negumereanu did answer the bell for round three, but he wasn’t able to mount any sort of offense, allowing Safarov to take the round and the fight.

Diakiese looked better than he has in a while in the opening round, as he battered Duffy’s legs with kicks, defended his foe’s takedowns and even scored a knockdown with a perfectly timed left elbow to the head.

The bout went to the mat in the opening minute of round two, but the combatants didn’t stay there long. And once back on the feet, Diakiese got down to business again, cutting his foe over the left eye. Diakiese scored a second takedown with a minute left, and while it wasn’t a long stay, once standing, the Brit remained in control against the fence.

In the third, Duffy tried to turn things around, but Diakiese was just a step ahead of him on the feet and the mat, just like he was all night long, making the reading of the decision a mere formality for the “Bonecrusher.”

Allen delivered a measured effort in the first round, as he kept Rinaldi on the end of his punches, keeping the North Carolina product from getting into a steady offensive rhythm. There was more of the same in the second, with a strong flurry of punches from the Brit dropping Rinaldi late in the frame. Sticking to the game plan, Allen again controlled the final round and ended the bout with a flurry, making it an easy call for the judges, who delivered a verdict of 30-26, 30-27 and 29-28.

The Battle of Wales wasn’t the war that many expected, but after three rounds, Abertillery’s Jack Marshman scored a three-round split decision over Swansea’s John Phillips.

The tension was thick as the Welshmen began the fight, and while the action was sporadic, when they did exchange, there were brief fireworks. With 2:20 remaining in the opening stanza, Phillips dropped Marshman with a right hand, but Phillips refused to follow his foe to the canvas. Once standing against, Marshman did score with a solid shot upstairs, but it wasn’t enough to even the score or take the round.

Marshman got a flash knockdown of his own midway through the second round, and “The Hammer” was the busier of the two during the final two frames, with his stick and move strategy frustrating Phillips, whose aggression didn’t translate into points on the scorecards.

Brazil’s Claudio Silva extended his over 11-year winning streak to 13, submitting Liverpool’s Danny Roberts in the third round of a back-and-forth welterweight bout.

Silva got the fight to the mat in the second minute of round one and he controlled most of the round there, but in the closing moments of the stanza, Roberts found some daylight, reversed position and landed some ground strikes before the horn.

Roberts rocked Silva early in round two, but wound up back on the mat with the Brazilian Jiu-Jitsu black belt. Silva nearly got an arm triangle, but again, Roberts scrambled out of trouble and into the top position before getting to his feet with two minutes left. “Hot Chocolate” was able to rock Silva with his strikes again, but the resilient Brazilian got the takedown once more.

Hurting Silva once more as round three began, Roberts decided to take the top position on the canvas in a quest to ground and pound his foe, bloodying the Brazilian in the process. Silva sought a heel hook, Robert defending well, and then “Hannibal” went for the armbar. Roberts tried to slam his way out of trouble, but referee Kevin Sataki called a halt to the fight at 3:37 of the final frame.

London’s own Nathaniel Wood got the hometown fans roaring as he moved to 3-0 in the UFC with a second-round submission win over Jose Quinonez in a clash of bantamweight up and comers.

Quinonez tried to silence the crowd early on, taking Wood to the mat in the second minute. Wood reversed and got back to his feet, allowing him to work his standup attack again. A quick jab put Quinonez on the deck with under two minutes left, and Wood tried to lock in a choke. Quinonez scrambled out of trouble and to his feet, and he landed some solid counters before a late takedown by Wood.

After more solid standup work in round two, Wood suddenly took the fight to the mat and even more suddenly took Quinonez’ back and submitted his foe with a rear naked choke. The official time of the submission was 2:46 of the second round.

Wood moves to 16-3 with the win. Quinonez saw a four-fight winning streak snapped, falling to 8-3.

Dominick Reyes had to dig deep to keep his unbeaten record intact, but he did just that as he pounded out a three-round split decision over fellow light heavyweight contender Volkan Oezdemir.

It was an interesting first round between the two 205-pound standouts and a tough one to score, as Reyes got in his shots and showed off some solid defense while Oezdemir stalked and landed his own strikes while also scoring a takedown in the first five minutes.

Oezdemir and Reyes traded takedown attempts that came up empty in the second, opting then to go back to their tactical striking match. While upright, Switzerland’s Oezdemir’s experience was beginning to show, and Reyes’ nose was apparently bothering him, as he was breathing through his mouth and pawing at the nose.

Fatigue appeared to catch up to Oezdemir in the third round as Reyes got his second wind, and while there wasn’t a lot of sustained action, California’s Reyes was the busier of the two, and two of the three judges agreed.

Birmingham’s Leon Edwards fought a smart and tactical fight in the UFC London co-main event, winning a three-round split decision over Gunnar Nelson in a battle between welterweight contenders.

Quickly closing the distance on Edwards, Nelson worked for a takedown and got it, pushing his foe to the fence. Edwards got to his feet, only to have Nelson remain locked on. Edwards did reverse position, though, and just before the midway point of the round, he scored his own takedown. Nelson ultimately got upright again just before the frame ended, but wasn’t able to get in any scoring to turn things around.

The second round was a largely a war of nerves until a flush left elbow in the closing seconds of the stanza put Nelson on the deck. Edwards tried to finish the Iceland native, but Nelson had his wits about him, and he was able to defend himself until the horn sounded.

Sporting a knot round his right eye from the elbow, Nelson went on the attack to begin the final round as he tried to get the fight to the mat, but Edwards defended well and separated from his foe. With one minute left, Nelson got his takedown and moved into the mount. Edwards tried to tie his foe up, and he was successful in keeping Nelson from locking in a fight-finishing move, securing his victory by scores of 29-27, 29-28 and 28-29.

After nearly 16 years and 46 fights in the pro MMA game, welterweight contender Jorge Masvidal's win over Darren Till may be the biggest one of his career, as he knocked out the recent world title challenger in the second round of their UFC London main event at the O2 Arena.

“I need that belt wrapped around my waist,” said the 34-year-old Masvidal.

Masvidal raced out at the bell and threw an oblique kick that landed low. After a brief break, the fight got underway again and Till floored Masvidal with a straight left. Masvidal weathered the follow-up attack and got back to the feet, but the two went back to the mat moments later. After a brief stay on the canvas, the fighters rose and Masvidal settled in, landing kicks to the leg of Till. Another left by Till got Masvidal’s attention, and while the Floridian shook off the blow, he knew he was in a fight. With a minute left, Masvidal began marching forward and he landed a pair of 1-2s, prompting a clinch against the fence by Till.

Till got in Masvidal’s face to start round two, landing some shots that were answered by kicks from “Gamebred.” An inadvertent eye poke from Till brought a visit from the Octagonside physician, but Masvidal was cleared to continue and he quickly took Till down. Till rose quickly and the two took turns throwing and landing strikes. Yet in the midst of the back and forth, Masvidal suddenly struck with a flush left to the head. As Till fell backwards, another left finished the fight, with referee Marc Goddard calling a stop to the bout at 3:05 of the second round.