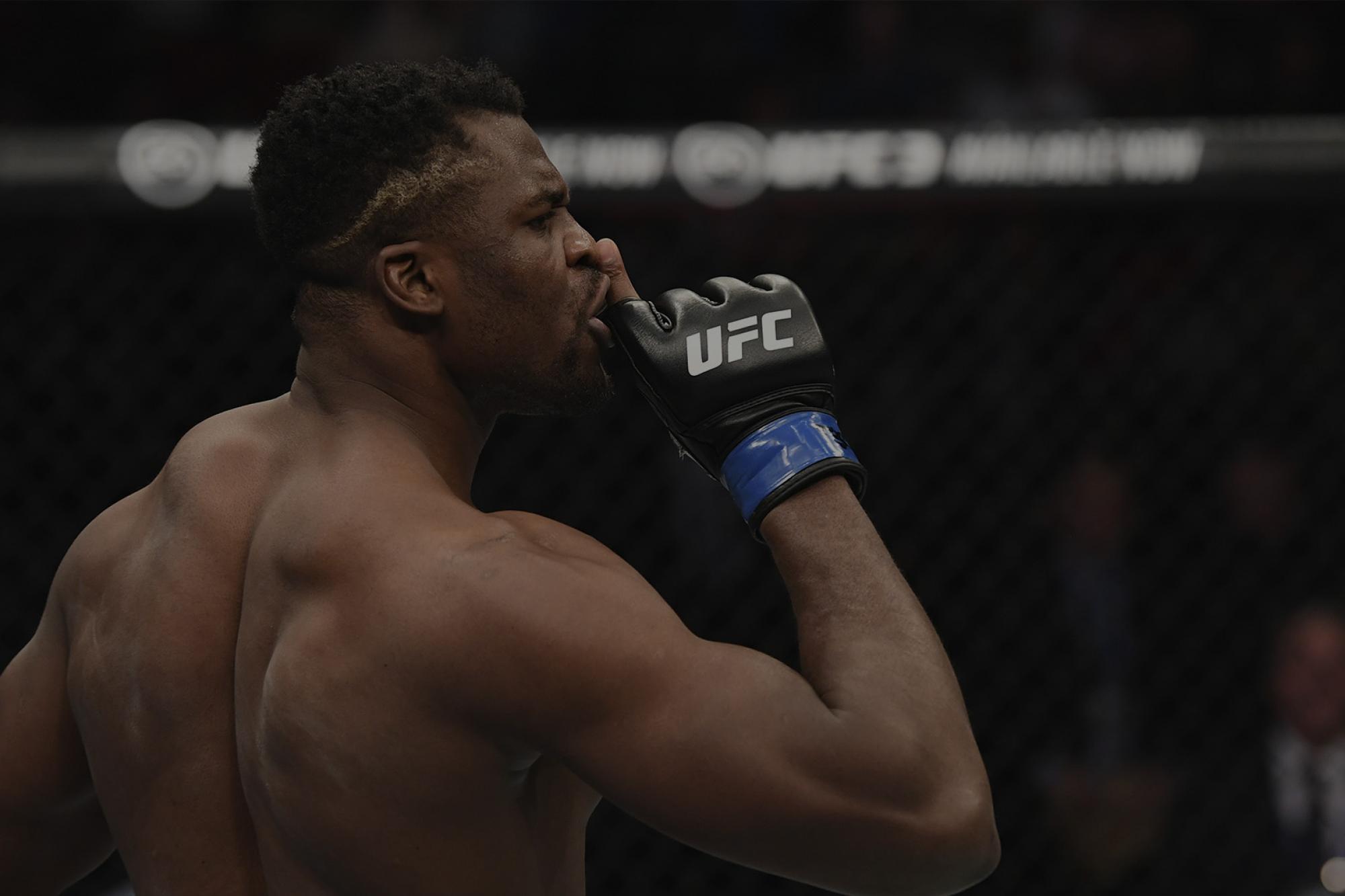 In a blockbuster main event, former heavyweight champion Cain Velasquez makes his long-awaited return to action against brutal knockout artist Francis Ngannou. Velasquez has long been considered one of the greatest heavyweight fighters of all-time but, unfortunately, injuries have been a far greater enemy to him than any past opponent. When he’s healthy, Velasquez is a force of nature with dominant wins over the likes of Junior Dos Santos, Brock Lesnar and Travis Browne. Now after more than two years away, Velasquez returns but he’s got a tough task ahead of him. Ngannou is considered one of the most ferocious power punchers in the history of the UFC. The Cameroonian-born slugger has demolished six opponents in the UFC by way of knockout and he’s coming off a stunning 45-second victory over top 10-ranked Curtis Blaydes in his last fight. Ngannou only needs one shot to land and he can put anybody in the heavyweight division to sleep — including Velasquez.

PAUL FELDER VS. JAMES VICK
After past hiccups prevented these two lightweights from clashing in the past, Paul Felder will finally meet James Vick in the co-main event from Phoenix. Felder has gone 3-1 in his past four fights, but his one loss came in a fight where he moved up to welterweight on short notice, broke his arm and still fought to a split decision. Prior to that setback, Felder had rattled off three straight wins at lightweight, all by knockout. As for Vick, the former Ultimate Fighter competitor has gone 9-2 at lightweight since the reality show ended, including wins over opponents such as Francisco Trinaldo and Joseph Duffy. Following a disappointing outing in his last fight against Justin Gaethje, Vick is determined to start his climb back up the rankings and he hopes that starts with a win over the always exciting Felder this weekend.

CORTNEY CASEY VS. CYNTHIA CALVILLO
In strawweight action on the main card, Cortney Casey will look to build some momentum when she takes on ground specialist Cynthia Calvillo. Considered one of the toughest outs at 115 pounds, Casey has faced a laundry list of top competition in the division and she’s coming off a hard-fought win over Angela Hill in her most recent performance. To earn a second victory in a row, Casey will have to slow down Calvillo, who has gone 4-1 in the UFC, with three of those victories coming by way of submission. As the strawweight division continues to look for contenders, this is a pivotal fight for both athletes going into this main card showdown.

ALEX CACERES VS. KRON GRACIE
Veteran featherweight Alex Caceres has never shied away from top competition, but he has a very interesting matchup ahead of him this weekend as he takes on multi-time grappling champion Kron Gracie. Coming from the most famous family in all of mixed martial arts, Gracie has built his reputation on a nasty submission arsenal that has earned him grappling wins over names such as Garry Tonon, Shinya Aoki and Beneil Dariush. As a fighter, Gracie has gone 4-0 with all four wins coming by way of submission. There’s a lot of hype surrounding Gracie’s debut but he didn’t get an easy test in his first fight because Caceres has gone up against much tougher competition during his career as a stalwart of the UFC’s 145-pound division. Caceres is nobody’s stepping stone and he will do everything in his power to give Gracie a rude welcome to the Octagon.

VICENTE LUQUE VS. BRYAN BARBERENA
There is no overselling involved when calling Vicente Luque one of the most vicious finishers in the entire welterweight division. The Brazilian fighter has gone 7-2 in the UFC with all seven wins coming by way of knockout or submission. He’s got a deadly ground game and knockout power in both hands and that’s why Luque has become appointment viewing every time he steps inside the Octagon. This weekend, Luque faces off with tough-as-nails welterweight prospect Bryan Barberena, who has a 4-2 record over his past six fights, including wins over Jake Ellenberger and Sage Northcutt. Barberena is a devastating finisher in his own right, so this could be a dark horse pick for Fight of the Night.

ANDRE FILI VS. MYLES JURY
Featherweights Andre Fili and Myles Jury will help kick off the main card on Sunday night with both fighters looking to bounce back from recent losses. Fili is coming off a heartbreaking split decision to Michael Johnson in his most recent performance, which stopped his two-fight win streak in the division. Meanwhile, Jury is in a very similar situation, with a 2-1 mark over his past three fights while picking up wins over Mike De La Torre and Rick Glenn. In a deep and dangerous featherweight division, Fili and Jury know how important it will be to get a win in this clash.

JIMMIE RIVERA VS. ALJAMAIN STERLING
Top 10-ranked bantamweights Jimmie Rivera and Aljamain Sterling face off in a pivotal matchup at 135 pounds in the preliminary card headliner. With a 6-1 record since joining the UFC, Rivera has proven he belongs among the elite fighters in the 135-pound division and he hopes another win will put him back into title contention in 2019. As for Sterling, he’s gone 4-1 over his past five fights, including back-to-back wins in his most recent performances. Sterling is known as a ground specialist but he’s worked tirelessly to improve his striking, so expect a high-paced fight no matter where this one takes place.

BENITO LOPEZ VS. MANNY BERMUDEZ
Expect fireworks when bantamweights Benito Lopez and Manny Bermudez meet on Sunday night in Phoenix. Following his debut on Dana White’s Tuesday Night Contender Series, Lopez put on a thrilling performance against Albert Morales to get his first UFC win in 2017. Now after a long layoff, Lopez is finally back in action and he’s got arguably one of the best prospects in the division opposing him as Bermudez looks to build on two submission victories since joining the UFC roster. Both fighters are also undefeated, so by the end of the night, either Lopez or Bermudez will taste defeat for the first time.

ASHLEE EVANS-SMITH VS. ANDREA LEE
As the women’s flyweight division continues to sort itself out, Ashlee Evans-Smith and Andrea Lee have a chance to make a huge statement in their fight this weekend. Evans-Smith is a former bantamweight who has found new life at 125 pounds after picking up her first flyweight win last year. Now the former college wrestler will take on a former LFA champion in Lee, who has won five fights in a row, including her UFC debut last May. As the flyweight division continues to look for new contenders, either Evans-Smith or Lee will find themselves in an advantageous position with a win going forward into 2019.

SCOTT HOLTZMAN VS. NIK LENTZ
Tennessee native and former hockey enforcer Scott Holtzman suffered through some ups and downs in the early part of his UFC career but lately he’s looked better than ever while stringing together three straight wins. To make it four in a row, Holtzman has to go through crafty veteran Nik Lentz, who has gone 4-2 since returning the lightweight division. While Lentz is best known as a grinding wrestler, he picked up a huge head kick knockout in his last fight against former title contender Gray Maynard, which proved he’s got striking to back up his grappling game.

JESSICA PENNE VS. JODIE ESQUIBEL
Former strawweight title challenger Jessica Penne might find herself in a do-or-die situation this weekend in her bout against Jodie Esquibel. Penne has dropped her last three fights in a row, with inactivity becoming her greatest opponent thanks to only one fight each year between 2015 and 2017. Now she returns after nearly two years off to face Esquibel, who is still searching for her first UFC win after falling in back-to-back fights to start her career inside the Octagon.

RENAN BARAO VS. LUKE SANDERS
Former bantamweight champion Renan Barao has suffered through the toughest run of his career in recent years, amassing a 1-5 record over his past six fights while bouncing back and forth between featherweight and bantamweight. To stave off a fourth straight defeat, Barao has to right his ship and take out Luke Sanders, who has also struggled to find consistency in his UFC career. Sanders was undefeated through his first 11 fights but he’s now gone just 1-3 in his past four appearances and he has to know a win here is paramount as he looks to climb into the contender’s race at 135 pounds.

ALEXANDRA ALBU VS. EMILY WHITMIRE
Russian prospect Alexandra Albu is still very young in her career but thus far she’s looked like she definitely belongs in the UFC’s strawweight division. Albu is a perfect 7-0 overall, including a unanimous decision win over Kailin Curran in her first UFC fight. Albu faces former Ultimate Fighter competitor Emily Whitmire, who previously fought at 125 pounds but now calls the strawweight division her home. The move down in weight paid off last July when she got her first win in the UFC and now she’ll go for two in a row while facing Albu this weekend.