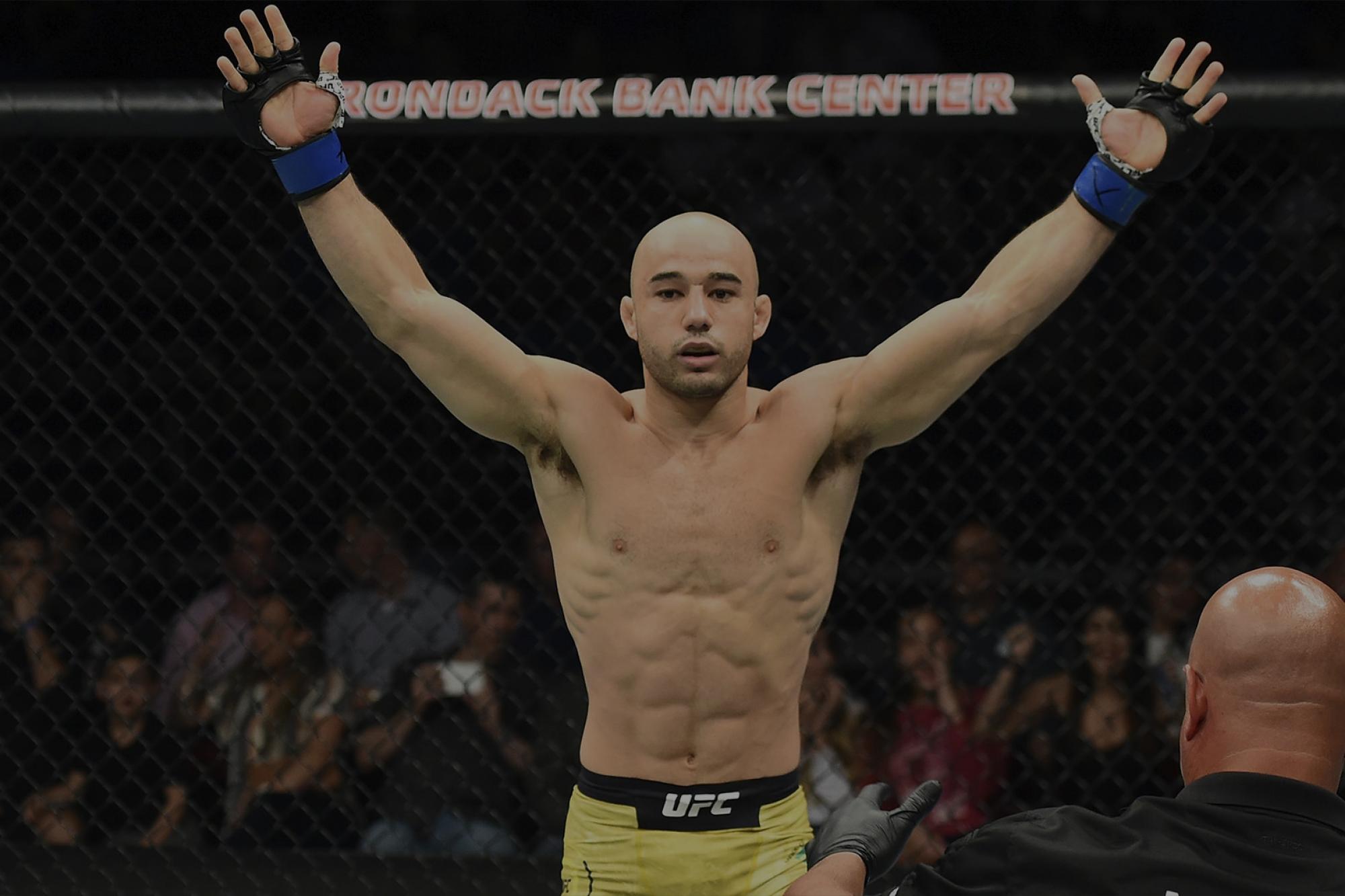 In a fight that will almost certainly earn the winner a shot at the bantamweight title, Raphael Assuncao clashes with Marlon Moraes in Saturday’s five-round main event from Fortaleza, Brazil. The two top five-ranked contenders first met less than two years ago in what was Moraes’ UFC debut, and on that night Assuncao edged him out to earn a split decision victory. Since that time, Moraes has racked up three wins in a row including a pair of stunning knockouts over Jimmie Rivera and Aljamain Sterling. As for Assuncao, he has also remained undefeated with two more wins of his own, including a knockout of Matthew Lopez and a decision victory over Rob Font. Assuncao has consistently been one of the best bantamweights in the sport, with a ridiculous 11-1 record since moving to 135 pounds, and he has split a pair of fights with current champ TJ Dillashaw. To earn a title shot, he’ll have to earn a second win over Moraes, who has arguably looked as good as anybody in the bantamweight division over the past year. With a lot on the line, expect Assuncao and Moraes to leave it all in the Octagon on Saturday night.

JOSE ALDO VS. RENATO MOICANO
Arguably the greatest featherweight champion of all-time, Jose Aldo got back on track in his last fight with a jaw-dropping knockout against Jeremy Stephens. Now the Brazilian legend will fight at home against a fellow countryman in Renato Moicano, who has quickly risen up the ranks at 145 pounds with a 5-1 record through his first six UFC fights. Moicano’s only loss came against recent world title challenger Brian Ortega in a Fight of the Night performance, and he most recently dispatched veteran featherweight Cub Swanson with a first-round submission. Moicano could punch his ticket to a shot at champion Max Holloway with a win but that’s a tall task ahead of him considering Aldo has only fallen to two fighters — Holloway and Conor McGregor — over the past 13 years.

Hear from Jose Aldo before his fight against Renato Moicano this weekend about why the former champ loves to fight.

DEMIAN MAIA VS. LYMAN GOOD
Submission specialist Demian Maia has fallen on hard times lately with three losses in a row, including one in his bid to become welterweight champion in 2017. While Maia has suffered a trio of consecutive defeats, his losses have come to the current welterweight champion in Tyron Woodley, former interim champion Colby Covington and top-ranked contender Kamaru Usman. Maia will look to rebound while facing a surging welterweight upstart in Lyman Good, who has gone 2-1 thus far in the UFC, with both of his wins coming by way of knockout. Good is a dangerous fighter with seemingly nothing to lose while going up against a top 10 welterweight in Maia, who most definitely wants to avoid a fourth loss in a row.

Hear from Oliveira on why he fights.

CHARLES OLIVEIRA VS. DAVID TEYMUR
With a record for the most submissions in the history of the UFC, Charles Oliveira has continued to rack up wins since returning to the lightweight division in 2017. The Brazilian grappler has now won four of his past five fights — all by submission — while quickly earning a reputation as one of the most dangerous ground fighters in the sport. His opponent, David Teymur, is arguably the polar opposite, as the former Ultimate Fighter competitor is a dynamic striker with power in his hands and good all-around technique when he’s on his feet. Teymur has been very impressive lately with five straight wins in the UFC, and he’ll look for a sixth consecutive victory while trying to avoid becoming Oliveira’s latest submission victim.

JOHNNY WALKER VS. JUSTIN LEDET
Contender Series Brazil veteran Johnny Walker turned a lot of heads with his UFC debut when he knocked out Khalil Rountree Jr. with a brutal elbow in the first round last November. Now the Brazilian prospect will look to prove that first win was no fluke when he takes on veteran fighter Justin Ledet this weekend. Ledet wasn’t able to get a win in his light heavyweight debut, but he’s obviously not afraid of a challenge by stepping into Walker’s backyard for his second trip to 205 pounds.

LIVINHA SOUZA VS. SARAH FROTA
Former Invicta FC champion Livinha Souza will make her second UFC appearance after picking up a submission victory over Alex Chambers in her debut. Souza has only suffered a defeat once in her 13-fight career, and that came in a razor-close split decision to current UFC strawweight Angela Hill. Since that setback, Souza has won three in a row, including that victory inside the Octagon. Her opponent, Sarah Frota, will be making her UFC debut after a stunning knockout to earn her contract by way of the Contender Series Brazil. Frota is 9-0 in her career with an impressive string of finishes along the way, so this could be a dark horse pick for Fight of the Night when these two strawweights battle on Saturday night.

MARKUS PEREZ VS. ANTHONY HERNANDEZ
Markus Perez and Anthony Hernandez will meet on the preliminary card in a middleweight clash. Perez has gone just 1-2 since joining the UFC, but he’s definitely had some tough tests along the way, including a three-round war with former University of Alabama football standout Eryk Anders. Meanwhile, Hernandez will be making his Octagon debut with a perfect 6-0 record while previously competing on Dana White’s Tuesday Night Contender Series. Hernandez is known for a wicked guillotine choke, which has earned him three of his six professional wins, so don’t blink if he latches on to that submission against Perez.

MARA ROMELLO BORELLA VS. TAILA SANTOS
Italian flyweight Mara Romello Borella returns to action this weekend against newcomer Taila Santos, who joins the UFC with a spotless 15-0 record, including her win on the Contender Series Brazil that earned her a contract. Santos is an explosive fighter with a slew of finishes on her resume, so expect excitement when she steps into the Octagon. The same could be said of Borella, who was on a six-fight win streak prior to her setback to top five-ranked Katlyn Chookagian in her last bout in January 2018.

THIAGO ALVES VS. MAX GRIFFIN
Former welterweight title contender Thiago Alves has definitely gone through some tough times lately, dropping four out of his past five fights. Regardless of his record, Alves has always been considered an elite striker at 170 pounds with some of the nastiest leg kicks in the history of the sport. To ensure he gets back in the win column this weekend, Alves has to go through Max Griffin, who has bounced back and forth between wins and losses since first joining the UFC in 2016. Griffin’s biggest win to date came against Mike Perry in an upset victory and now he’ll look to add Alves’ name to his resume.

JUNIOR ALBINI VS. JAIRZINHO ROZENSTRUIK
Brazilian slugger Junior Albini will attempt to stave off a third defeat in a row when he takes on late notice replacement Jairzinho Rozenstruik in Brazil. Albini has definitely shown flashes of brilliance during his UFC career, but he’s run into a pair of tough losses recently including a submission defeat to Russian ground specialist Aleksei Oleinik. As for Rozenstruik, he comes in with an undefeated 6-0 record, including five knockouts.

RICARDO RAMOS VS. SAID NURMAGOMEDOV
Brazilian bantamweight Ricardo Ramos has looked like one of the top prospects at 135 pounds since joining the UFC. Ramos got everyone’s attention when he blasted Aiemann Zahabi with a brutal spinning back elbow to earn a knockout in his second UFC fight and his record inside the Octagon now stands at 3-0. To get to 4-0, Ramos has to go through Said Nurmagomedov, a former flyweight turned bantamweight. The 12-1 Dagestani fighter trains with a great team out of New Jersey, including main event fighter Marlon Moraes.

ROGERIO BONTORIN VS. MAGOMED BIBULATOV
In flyweight action, Rogerio Bontorin will look to build on his standing rear naked choke submission on the Contender Series Brazil when he makes his UFC debut against Russian prospect Magomed Bibulatov. Prior to a loss in his last fight, Bibulatov was considered one of the best up and comers at 125 pounds after starting his career with a perfect 13-0 record, including a win in his first fight in the UFC. To turn things around after that defeat, Bibulatov will have to beat Bontorin, who comes into the contest with wins in 13 of his 14 professional fights.

GERALDO DE FREITAS VS. FELIPE COLARES
The final addition to the card on Saturday night is a clash between a pair of UFC rookies as Geraldo de Freitas takes on Felipe Colares. Currently riding a six-fight win streak, de Freitas has definitely proven to be a tough out for anybody while earning three submissions and a knockout during his current run. Meanwhile, Colares is undefeated with a perfect 8-0 record and a slick submission game developed under a pair of legends in the Nogueira brothers out of Brazil.