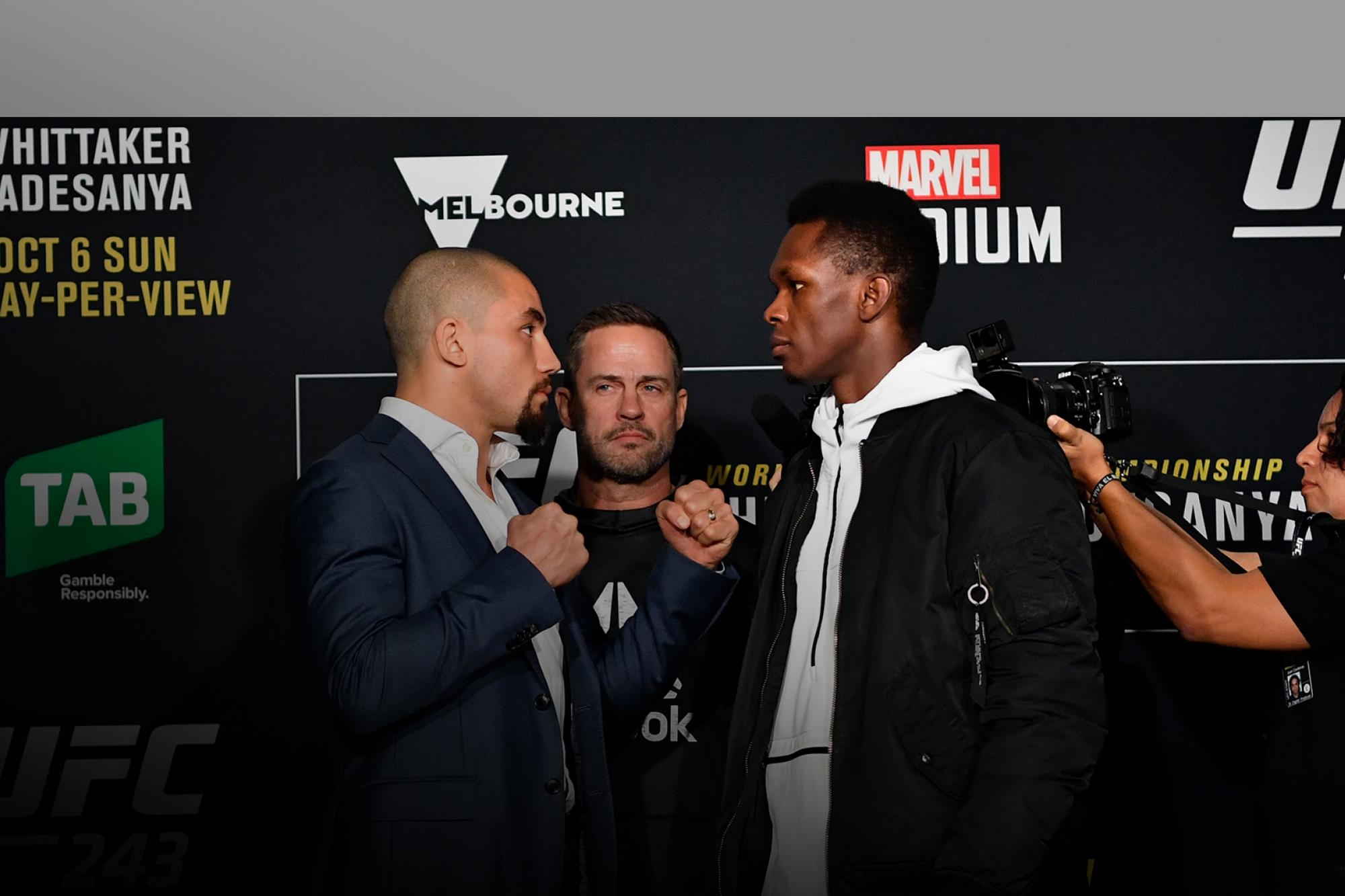 Al Iaquinta and Dan Hooker step into the Octagon for a great fight at 155 lbs in the co-main event.

Bantamweight up and comer Khalid Taha showed off a little bit of everything from his fight game in the opener, dropping newcomer Bruno Silva early before finishing him by submission in the third round.

After scoring a knockdown in the opening minute, it was clear that Taha’s striking was as sharp as usual, but Silva rebounded with solid ground work, and when you throw in two stoppages for Silva low blows, momentum appeared to be on the Brazilian’s side. But Taha made a late charge in the final round, and he stunned the jiu-jitsu black belt by locking in the arm triangle choke that forced a tap at 3:00 of the third stanza.

After suffering a flash knockdown seconds into the fight, Kassem settled in and had a solid round, scoring with a takedown as well as some solid strikes in a competitive frame.

In the second, it was Kim’s turn to settle into a rhythm, and as she did, she began putting it on the Aussie favorite with her strikes, and after a series of unanswered blows, a pair of body shots put Kassem on the deck and prompted referee Jim Perdios to halt the fight at 4:59 of the second round.

Megan Anderson’s homecoming fight was a victorious one, as the featherweight contender submitted French newcomer Zarah Fairn in the first round.

After Fairn got Anderson’s attention with her strikes in the early going, Anderson got the fight to the ground, and following some back and forth action, the Gold Coast native locked in a triangle choke and it was all over for Fairn, who tapped out at 3:57 of round one.

Two of the top lightweight prospects from down under put it all on the line in an exciting three-rounder, with New Zealand’s Brad Riddell outpointing Australia’s Jamie Mullarkey via unanimous decision.

Despite two of the three judges’ scores, the fight was competitive throughout, and it got more intense as the minutes passed, with the third round clearly one of the best of the year, as Riddell looked on the verge of a stoppage before Mullarkey hurt his foe and nearly sunk in a choke before “Quake” got up and finished strong, drawing a respectful roar from the crowd for the efforts of both newcomers.

Australia’s Callan Potter picked up his first UFC win in his second trip to the Octagon, as he outpointed Hawaiian newcomer Maki Pitolo via unanimous decision.

The two welterweights wasted no time getting into the fight, with both landing blows at close range that staggered the other. Early on it was Potter getting the better of the standup exchanges, with Pitolo bouncing back with some good ground work. As the bout progressed, though, Potter began to take control, and in the third, it was the Aussie’s ground work that secured the victory.

Following a slow first round, Matthews picked up his pace and subsequently the amount of significant strikes landed. Akman was game throughout, but he just wasn’t active enough to take Matthews off track, making the three scores of 30-27 the right call.

Tafa did some good work at close range along the fence in the early stages of the fight, but once the two big men separated, Tafa swung a wild right hand, but De Castro struck with his right first, nailing Tafa and sending him down and out in emphatic fashion. The official time of Jim Perdios’ stoppage was 2:10 of round one.

Surging welterweight Dhiego Lima made it three straight wins, as he scored a three-round split decision over Luke Jumeau.

The first round was largely tactical, but Lima made an impression with several thudding leg kicks, and he kept the heat on with that tactic in the second stanza, one of which put Jumeau on the canvas briefly. Jumeau started to get more aggressive later in the round, jarring Lima briefly, but the Brazilian roared right back with a hard shot of his own to even the score. In the third, Jumeau kept pressing, but Lima’s stick and move strategy continued to pay dividends, ultimately allowing him to leave the Octagon with a hard-fought victory.

A leg kick by Tuivasa put Spivac on the deck moments into the fight, yet once the Moldovan rose, he put the fight back on the mat with a smooth takedown. Tuivasa got back to his feet and went back to work, but Spivac wasn’t backing down from the hard-hitting Aussie, and he continued to put Tuivasa on the canvas with his takedowns.

Spivac’s grappling was even more dominant in the second round, and once he got into the mount position, Tuivasa was in deep trouble. An elbow opened up a cut on Tuivasa’s face and then “The Polar Bear” locked in an arm triangle choke that ended the bout at 3:14 of round two.

New Zealand’s Dan Hooker earned his first decision victory as a member of the UFC roster, but fans in Melbourne weren’t complaining, as “The Hangman” shut out fellow lightweight contender Al Iaquinta over three rounds in the UFC 243 co-main event.

Hooker took an early lead on the feet, and while Iaquinta tried to switch things up with a takedown, a series of elbows to the head allowed the New Zealander to avoid any danger and take control on the mat himself. With less than a minute to go, Iaquinta got back to his feet, but Hooker kept the leg kicks coming, capping off a solid round for him.

With Hooker using his height and reach advantage perfectly, Iaquinta needed to find a way to break his foe’s rhythm, and he had some success with his right hand, landing a few of them on Hooker. But the ground game still wasn’t clicking for Iaquinta, as he couldn’t get the bout to the mat, and with 40 seconds left, it was Hooker getting the fight to the canvas thanks to a right hand that dropped the New Yorker.

Iaquinta, now bloodied, kept marching forward in the third round, but Hooker wouldn’t let him get back in the fight, with his stiff jab dictating matters down the stretch as he locked up another quality victory.

Undisputed. There’s really not much more to say than that after New Zealand-based Nigerian Israel Adesanya unified the middleweight titles in the main event of UFC 243 with a second-round knockout of Robert Whittaker at Marvel Stadium in Melbourne.

The victory, which snapped Whittaker’s nine-fight winning streak, was another master class from Adesanya, who soared to the top of the 185-pound weight class in the space of seven fights taking a little over 19 months.

Sydney’s Whittaker was the aggressor as the fight began, throwing kicks to the leg to set up punches upstairs. Auckland’s Adesanya was content to let Whittaker lead while he worked his jab effectively in response. Adesanya got busier as the round progressed, though, and his strikes were more on target than Whittaker’s wilder shots, the most emphatic one being a right hand that put “The Reaper” on the deck at the horn.

Apparently unbothered by the previous round’s knockdown, Whittaker went right back on the attack to start the second stanza, but Adesanya was cool and punishing under pressure, as he bloodied his opponent and also found a home for the right hand again. Whittaker’s kicks were still flying, but the recklessness of his attack cost him big, as a counter left put him on the canvas and a follow-up barrage ended matters, with referee Marc Goddard stepping in at the 3:33 mark of round two.