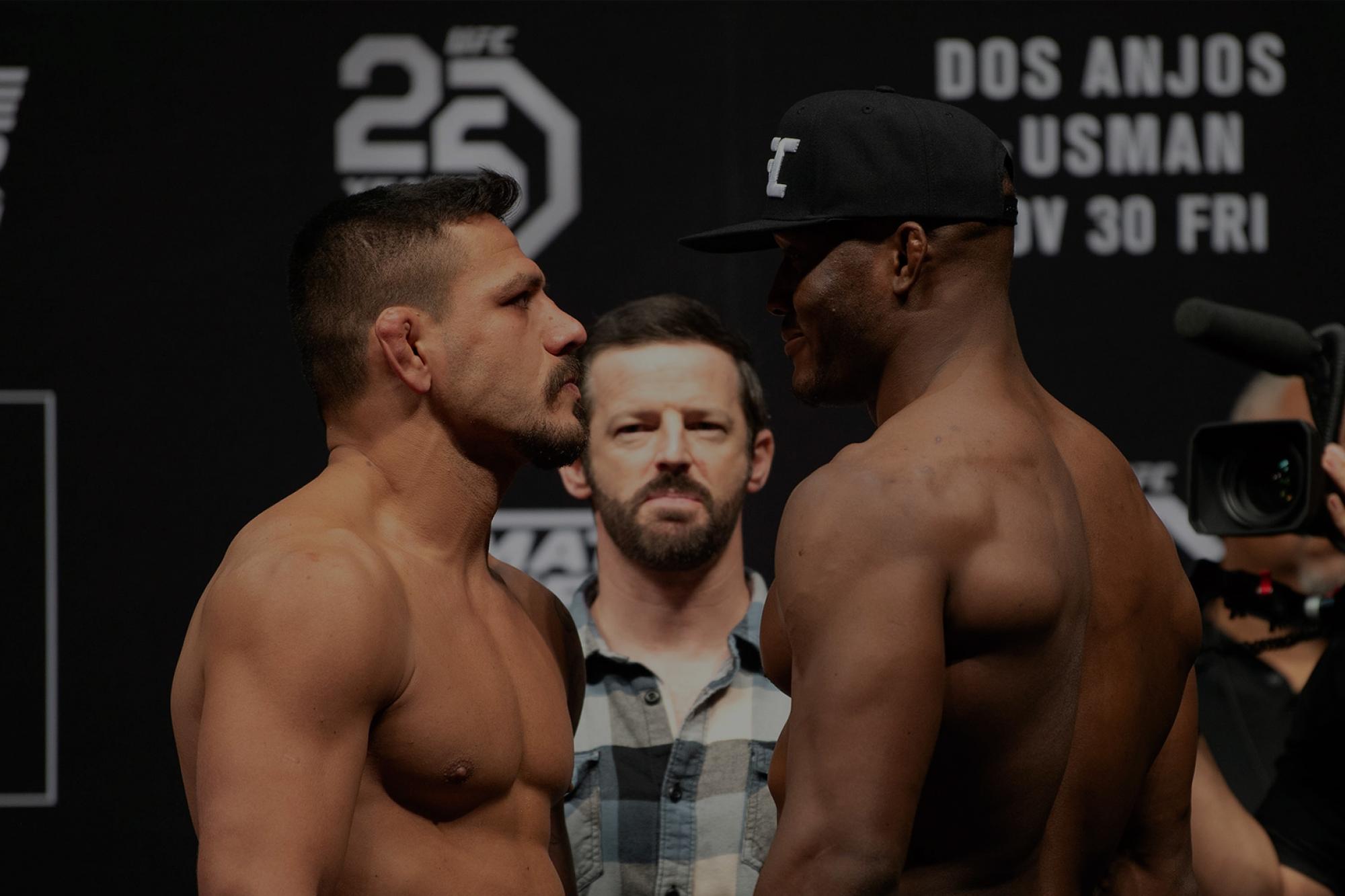 Usman went for a single-leg takedown, but dos Anjos stuffed it. Dos Anjos moved in and landed a couple hooks after a leg kick. Usman shot low and was able to get his takedown. Dos Anjos got up to his feet, but Usman maintained control against the fence. When they returned to the center of the Octagon, dos Anjos hit Usman with a good body kick and attempted a flying kick, and Usman elected to wrap dos Anjos up against the cage. Usman rolled into a takedown and began his ground-and-pound attack. Dos Anjos was able to hit Usman with a big up-kick toward the end of the round.

The second round started with Usman pressing dos Anjos against the fence after a short striking exchange. Usman landed a few knees to dos Anjos' body before scoring another takedown, but dos Anjos was able to land a few elbows from full guard. From the bottom, dos Anjos got a hold of one of Usman's left arm and looked for a kimura, but Usman pushed off the cage with his feet to escape. Usman continued the pressure against the fence, hitting dos Anjos with a left elbow. Both fighters threw a mix of body and head kicks to end the round, but none of them hit flush.

In the third round, Usman continued to press dos Anjos against the fence and ripped several hooks to his body. Dos Anjos returned fire as well, prompting Usman to clinch dos Anjos against the cage. Dos Anjos connected with a left uppercut, and Usman returned with a couple of hooks. Usman shot for a double-leg takedown and was successful. Usman maintained control for about a minute, but when they stood back up, dos Anjos connected with several punches that looked to stun Usman.

The fighters stood and exchanged blows to start the fourth round, and Usman started to get the better of dos Anjos with hooks and straight punches. He continued to pressure dos Anjos and took him down against the cage. When dos Anjos was almost back to his feet, Usman yanked him back down again and kept the ground-and-pound attack going for the rest of the round.

Usman hit dos Anjos with an axe kick and followed with a striaght punch that backed him up against the cage.Usman continued to grind dos Anjos on the ground. Dos Anjos was able to attempt a choke from the bottom. Usman circled around to defend it, and eventually escaped into side control, where he rained down hammer fists. Usman maintained that top control for the rest of the round.

Espino instantly landed a takedown, and Frazier worked up against the fence to try to work his way back up to his feet. Espino took Frazier's back and continued to land strikes. Frazier slipped out and got back to his feet, and he was able to land a knee before Espino regained control against the fence. Espino pushed back toward the center of the Octagon and landed another takedown, falling into side control. Espino got into a crucifix position where he was able to get a straight armbar submission.

Chiasson came out and forced the action. Kianzad attempted a takedown, but Chiasson stuffed the try and got control against the fence. Chiasson threw a few knees in the clinch, and Kianzad returned with a big elbow. Chiasson caught Kianzad with a straight when they broke apart, and then she rushed Kianzad to maintain control against the opposite side of the Octagon. When they returned to the center of the Octagon, Kianzad shot for a takedown, but Chiasson denied her, reversed and got Kianzad's back. Chiasson worked for a rear naked choke, but the round ended before she could complete a submission.

Chiasson charged out to start the second round and landed a few straight punches, but Kianzad hit Chiasson with a punch to stagger Chiasson. Against the fence, Chiasson was able to maintain control, but Chiasson broke apart and caught Kianzad with a couple punches that put Kianzad on her back. Kianzad was able to reverse position and get a hold of Chiasson's arm. It looked like Kianzad had a deep armbar, but Chiasson escaped and took Kianzad's back. From there, she was able to sink in a rear naked choke to end the fight and earn a contract in the UFC.

Munhoz comes out throwing heat immediately and stuffed Caraway's takedown attempt. Caraway was able to land a few close-range uppercuts, but Munhoz hit Caraway with a few leg kicks and a strong right cross. Munhoz kept the pressure on, and hit Caraway with a body shot that dropped Caraway to the mat. Munhoz swarmed Caraway and the referee stopped the fight.

Shahbazyan ducked under Stewart's punch and goes straight for a takedown, riding on Stewart's back across the cage. Shahbazyan landed a few knees to Stewart's head as Stewart continued to defend the takedown. As Shahbazyan released his grip, he hit Stewart with a head kick. Stewart applied pressure late, hitting Shahbazyan with a hook and swarming him, but Shahbazyan changed levels and finally scored a takedown.

To start the second round, Shahbazyan shot for a single-leg takedown and maintained pressure along the fence. Shahbazyan scrambled and took Stewart's back against the cage as he looked for the rear naked choke. Stewart got to his feet, but Shahbazyan kept his body lock and hit Stewart with several knees.

Shahbazyan changed levels quickly and went for another takedown to start the third round, but when they stood back up, Stewart was able to land a couple of strong elbows and a knee. Once again, Shahbazyan moved Stewart against the cage and got another takedown. Stewart got back to his feet quickly, but Shahbazyan kept his control. In the center of the Octagon, Stewart tripped Shahbazyan and hit him with vicious punches, elbows and hammer fists. Shahbazyan recovered and scored a couple more takedowns against the fence.

Both fighters spent the first couple minutes of the opening round looking for their range and feeling each other out. Kim shook Shevchenko with a close-range strike, but Shevchenko recovered and landed a strong front kick. They grappled against the cage, but the referee separated them and they returned to the center of the Octagon. Shevchenko ducked under Kim's punch and landed a left hook, and then executed a hip toss to end the round with a takedown.

In the final round, Kim went for a leg kick, but Shevchenko caught it and scored a takedown. As Kim attempted to stand, Shevchenko landed a knee to her chin and the fight was stopped for a moment, but no points were taken. Kim put pressure and both fighters landed strikes as the round came to a close.

Glenn started with a steady diet of leg kicks, and Aguilar landed a solid body kick of his own. Glenn moved in and Aguilar caught him flush with a straight punch followed by an uppercut that brought Glenn down to a knee before getting back to his feet. Glenn moved into a clinch, and Aguilar ripped a couple body punches before exiting with a good hook to the head at the end of the combo.

In the second round, Glenn got Aguilar into the clinch against the cage and missed with a big elbow before returning to the center of the Octagon. Aguilar continued his success countering Glenn's charges in with hooks and uppercuts. Glenn landed a good knee to Aguilar from the Thai clinch and seemed to gain momentum toward the end of the round.

The third round started with Glenn pressing the action again, catching Aguilar with a straight left hand and Aguilar continuing to have success with counter hooks and uppercuts. Against the cage, Glenn landed to big elbows, and then a left head kick, picking up more momentum in the final round. That stopped as soon as Glenn threw a low left kick that Aguilar countered with a big overhand right that dropped Glenn to the mat. Aguilar moved into side control, landing punches and elbows. Aguilar tried to take Glenn's back, but Glenn scrambled while taking more punishment. When they stood back up, Glenn caught Aguilar with an elbow that dropped him to a knee, and they scrambled in the clinch to end the fight.

Benavidez opened up with a few low kicks, but Perez quickly caught one of his kicks and applied pressure. Both fighters looked for opportunities to counter often. Benavidez landed his counter shots more often while Perez struggled to find the range early. Benavidez had control on top of Perez and landed a bunch of shots. It looked like the fight was over, but Perez somehow survived the flurry. It only lasted a moment though, and Benavidez returned to the ground-and-pound to get the finish.

Batista baited Greene into throwing a strike and immediately slipped and controlled Greene against the cage before taking him down. Greene scooted into a triangle choke quickly, submitting Batista.

Both fighters come out throwing heat. Letson lands a few good low kicks, and Stoliarenko looked for a spinning elbow early. Letson got inside and landed a pair of three-punch combos midway through the first round. Letson had Stoliarenko against the cage, and when they separated, Stoliarenko landed an elbow, which Letson returned with a flush straight punch.

Letson continued the pressure in the second round as Stoliarenko looked to counter with straight punches. Stoliarenko shot for a takedown twice, but was stuffed on both attempts. Stoliarenko landed a good hook, but Letson returned with a couple straight punches of her own while controling the center of the Octagon. Letson ended the round with a perfect counter left hand.

In the final round, Stoliarenko applied pressure and eventually scored a kick takedown, but Letson reversed and got a takedown of her own. However, Stoliarenko got a hold of what looked to be a deep guillotine, but Letson escaped and maintained top position in full guard. With 30 seconds to go, the referee stood the fighters up, and Letson threw a beautiful tornado kick toward the end of the round.

Roberts mixed up his strikes to start the first round, making it difficult for Horcher to find his range and rhythm, but Horcher was able to catch one of Roberts' kicks and land a strong punch. Roberts landed a right hook that opened up a cut above Horcher's right eye. Horcher had control of Roberts against the cage, but Roberts reversed and turned a gnarly choke in for the submission win.

Means and Rainey exchanged punches early and often, and Means was able to score a takedown, landing several strikes from the top position. Means' ground-and-pound overwhelmed Rainey, forcing the referee to stop the fight.

Gutierrez worked leg kicks in early, and Barcelos counters with a few flurries of forward pressure. Gutierrez began to follow his leg kicks with tight punching combos later in the first round. Barcelos scored a takedown and mostly maintained control, but Gutierrez landed a good up-kick before Barcelos gained side-control.

In the second round, Barcelos landed a double-leg takedown early and immediately started his ground-and-pound attack. Gutierrez attempted to escape, but Barcelos took his back against the cage and landed several strikes to Gutierrez' head. Barcelos moved into half-guard against the cage and continued to land a variety of punches and elbows from the top. Gutierrez tried to get up, but Barcelos pounced and sank a rear naked choke to end the fight.