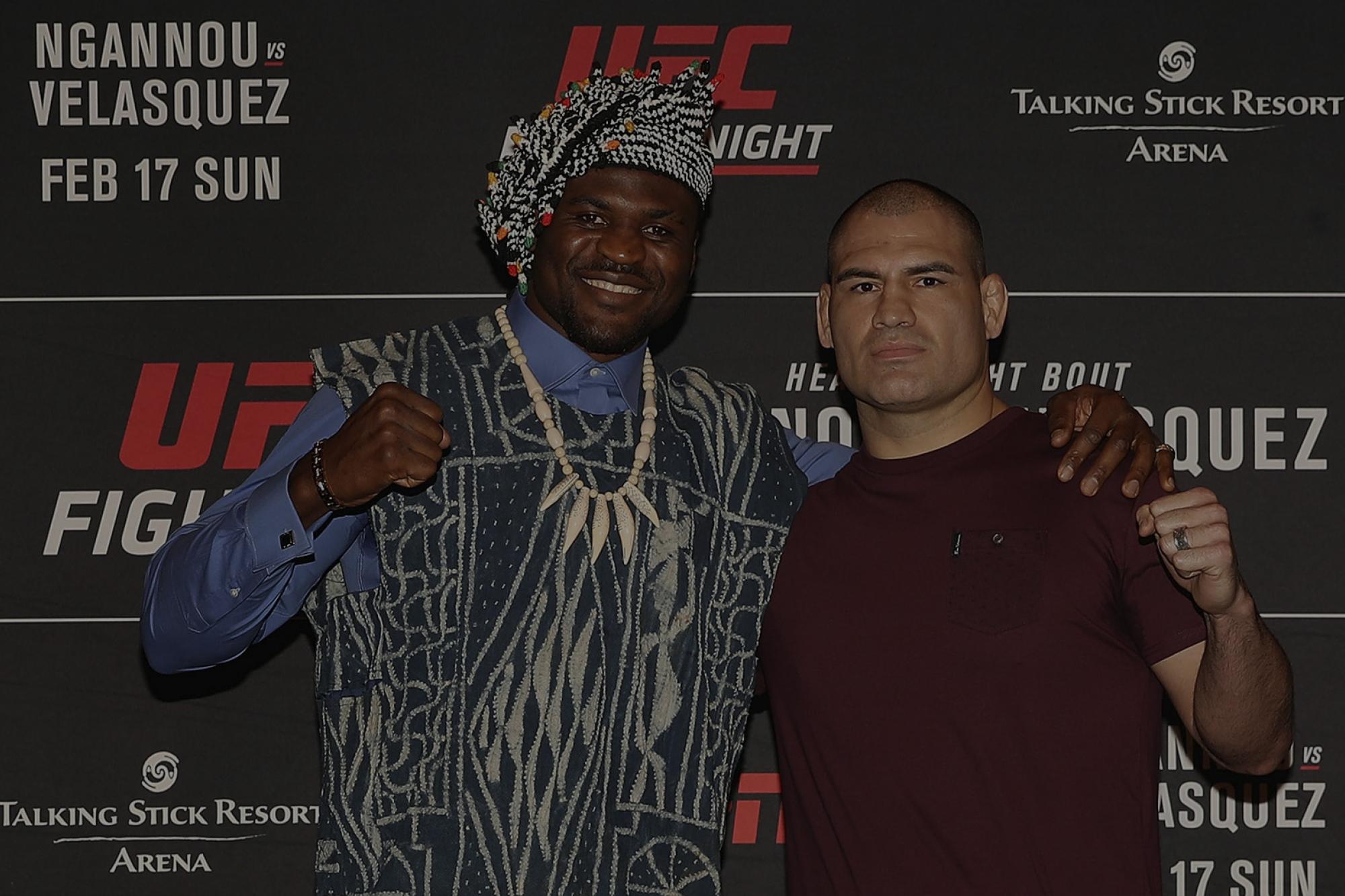 After his second reign as champion ended with his loss to Fabricio Werdum in June 2015, Velasquez bounced back to take out Travis Browne in the first round at UFC 200 one year later. A mixture of injuries prevented another attempt at a rematch with Werdum, and now, almost three years later, Velasquez makes his return to the Octagon.

He’ll face the reemerging force that is Francis Ngannou, who came back from two straight losses to finish Curtis Blaydes in the first round at Fight Night Beijing. It’s quite the welcome-back fight for Velasquez, but all week, he’s had a “business as usual” air about him. It’s less of a comeback and more of a return, one that allowed him to spend time with his family, get healthy and refine some of the skills that made him one of the most dangerous athletes in the UFC.

He’ll face the reemerging force that is Francis Ngannou, who came back from two straight losses to finish Curtis Blaydes in the first round at Fight Night Beijing. It’s quite the welcome-back fight for Velasquez, but all week, he’s had a “business as usual” air about him. It’s less of a comeback and more of a return, one that allowed him to spend time with his family, get healthy and refine some of the skills that made him one of the most dangerous athletes in the UFC.

Fighting in the place he called his “home state” at open workouts (Velasquez wrestled at Arizona State), he told the fans at Talking Stick Resort Arena that this was the “perfect time” for him to come back.

Based on how he’s looked leading up to the fight, and given the constant shuffling near the top of the heavyweight division, it’s hard to argue with him.

UFC: It’s your first fight in nearly three years. How does it feel to be getting back into the swing of things?

CV: It’s pretty normal. From the years off, coming back, it’s the same thing. I’ve done this so many times that even though I’ve been away for so long, that it’s very familiar. It’s very normal with training camp and also with just this week, being here in Phoenix, doing the media stuff, getting ready for a guy like Francis.

UFC: I know you took that time to get healthy but also to be with your family. What was that time like?

CV: Training. Had guys like Daniel Cormier and other guys in the gym that obviously always have fights, so you can stay pretty occupied with that kind of stuff. For me, I do like the coaching aspect of it, so I do like helping out other guys in whatever aspect I can as far as like, in the fight game, and that goes with the physical part and the mental part going into a fight, so it was good to do that, be at the gym, helping others and then just being with the people that I love, the people that are my number one. So it was all good, it was all positive. For me, as long as I’m doing something competitive, it’s something that I like to do and being active, then I’m OK with that.

UFC: When you say it kind of helps with the mental side of the game, what do you mean?

CV: What I meant was the people in the gym, that had certain fights, there’s a strong mental part that you need to have going into a fight. There’s all these doubts going into your head because it’s a lot of pressure as far as being in one fight. There’s a lot of build up for one fight, a lot of training for one fight. It’s not a season, it’s all for this one event, so me helping people get the mentality that you’ve trained yourself this long, all you have to do is what you’ve trained to do and go out there and do the same thing. I guess helping people out that way. As far as me taking a step back, it was a good refresher for my mental and also for my physical part just with the things that’ve happened to me in the past with the nagging injuries, with the UFC in general. It was good to step back, take a breather and get back into the swing of things when I was ready, and for me, it was this card and this fight.

UFC: Getting a guy like Francis in your first fight back, what are your thoughts on him as a fighter and the matchup?

CV: Again, just do the things that I’ve done in training and just translate it over to the fight. Again, I do this so much that it feels like I’m back in the swing of things, but a guy like Francis, extremely dangerous with his hands. Hits extremely hard, has a long reach, very strong, very powerful. I’m expecting all that going in, but I prepared well for it. I want this fight because of where it’s at and also the opponent. The strengths and the dangers that he possesses, I believe I have the antidote to that. I know countless ways of beating him, so I just have to do it that night. It’s just very simple, but the night that counts, I have to go out and do it.

UFC: Francis talked about how he kind of learned about UFC through your reign as champion. Is that weird for you?

CV: It’s not weird. I think the first time that was weird was when like, it was a couple years ago. I did this interview with Henry Cejudo and all these other fighters, and then they started saying the same thing. And that was the first time I had ever heard it, so I was kind of shocked. But no, again, this sport is so big, there’s so many different aspects to the sport that you watch a bunch of different guys. For Francis to watch my fights, I’m a complete fighter. It all depends on who I’m fighting and their fighting style, and I’ll adapt to that.

UFC: The heavyweight division is pretty open, so what do you want to show off in this first fight back?

CV: Just go out and get the job done, get the win. That’s first off. But in the time off that I’ve had, we’ve had the time to train the things that I’ve really wanted to train. Get different tools in my toolbox. When you have a fight, you’re in a box of training for a certain guy then that’s it. You’re not going out of that box. You’re staying in there for that gameplan, so for me to step back, be on the outside and work on the things that I’ve really wanted to work and do it on my own time was great for me. And also, I got to learn new things, perfect new things that I really wanted to perfect. It’s all about making people guess when you’re out there. Once they know your style and they get really comfortable, that’s when they can kind of impose their will, but if you always keep them guessing, if you’re always doing different stuff, then that’s when they’re off their toes. They don’t know what’s coming. That’s the best way to go out and beat somebody.

Zac Pacleb is a writer and producer for UFC.com. You can follw him on Twitter @ZacPacleb.