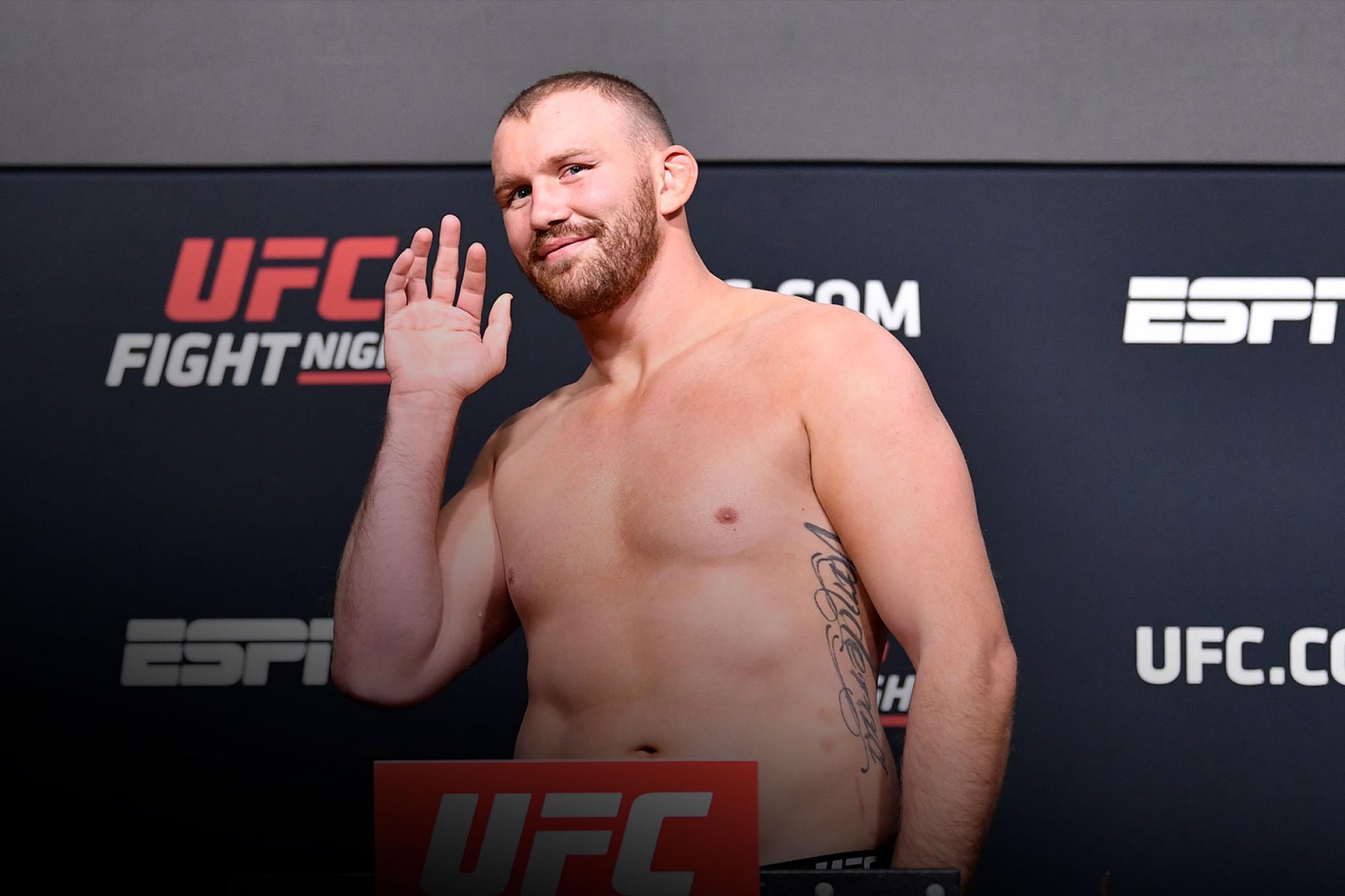 After A Disappointing UFC Debut, Jared Vanderaa Wants To Show Why He's A Heavyweight Prospect To Watch
От Thomas Gerbasi on Twitter @tgerbasi • 24.07.21

Talk to Jared Vanderaa for any length of time and it’s evident that if this whole fighting thing doesn’t work out, he’s got a career in comedy waiting for him. But beyond that, maybe an analyst gig could be there for the heavyweight prospect, who recently broke down a young fighter on the rise.

Don't Miss Any Of UFC Fight Night: Font vs Garbrandt

“Considering for how long she's been in here, I expect a little bit more,” he laughs. “But her kicks are better than some of my adults.”

Telling it like it is, warts and all, is apparently a Vanderaa trait, as young Miss Ava was shown on Instagram with black makeup all over her face after her dad’s February loss to Serghei Spivac because she wanted to look like him.

That’s what happens when you practically grow up in the gym.

“At three months old, I had to take my daughter to work, so since then, she's seen me punch and kick people, she's seen me punched and kicked at,” Vanderaa said. “It doesn't bother her. She goes, 'Hey daddy, you fighting today?' Yeah. 'Okay, have fun.' It's got to the point where she spars now. She's a lot more apprehensive when she trains just because she's understanding that she's a bigger four-year-old. She towers over a lot of five and six-year-olds. But I don't push her into the sport. I do want her eventually to start doing jiu-jitsu one to three times a week when she gets a little bit older and more familiarized with it so that by 16, she'll have 12 years’ experience of keeping something consistent, and I want her to understand that consistency will make you better. I don't care what she does after 16, but I want her to have a true basis of what consistency builds for you, because I feel a lot of people nowadays don't necessarily have that foundation instilled in them.”

MORE UFC FIGHT NIGHT: The Rise of Rob Font | Edmen Shahbazyan Intent On Showing His Evolution | Yan Xiaonan Knocking On The Door | Jack Hermansson Aiming To Get Back To The Top | Bruno Silva's Life Has Led Him To The Octagon

Vanderaa and his fiancée Lauren will be expecting another little one this year, so the 29-year-old wants to get some fights and some wins in 2021, with the next bout up on Saturday against Justin Tafa. It’s a matchup Vanderaa is looking forward to, even if he did get some interesting comments on social media when the fight was made official.

“I'm excited,” he said. “On the announcement of this fight, someone posted that this is a Dogmart Matt Mitrione versus a Walmart Mark Hunt. (Laughs) Oh, that was good. I read that and I was on the floor. That was the funniest s**t.” 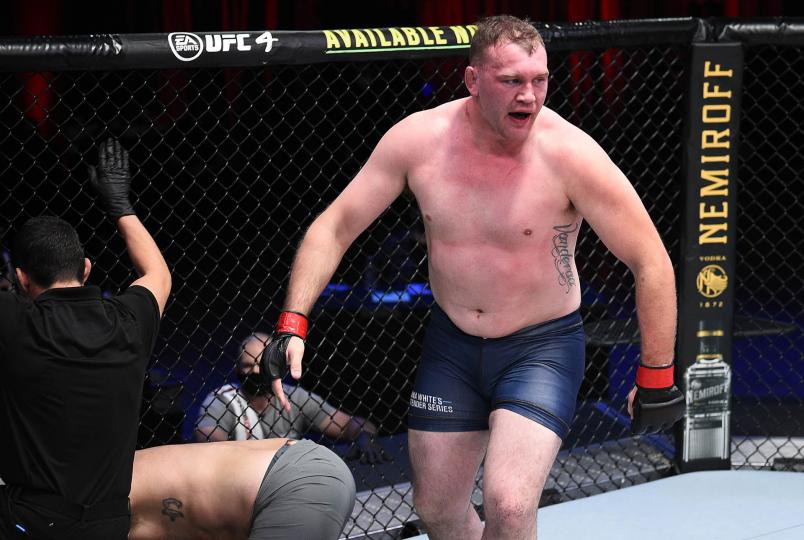 Getting the finish at UFC APEX on November 04, 2020 (Photo by Chris Unger/DWCS LLC/Zuffa LLC)

Apparently, the Hemet, California product has a pretty thick skin when it comes to such matters.

“I don't care for the comments section of anything, but if it's funny, I'm good,” Vanderaa said. “If you can come at me with a funny insult, I'm not one of those people who are like, 'Oh no, you said something mean.' If they're funny, I'm fine with it. I'm pro-clowning.”

It’s a unique attitude, but then again, Vanderaa is a unique guy. That’s outside the Octagon. Inside, he’s all fighter, which made his second-round stoppage loss to Spivac all the more disappointing to him.

“Looking back on the fight, the end of the fight looked more towards my ability to get out of my own head than actual skill,” he said. “Not taking anything away from Spivac, but I left my skills in the gutter. My goal in that fight was that I'm going to break his hand with my forehead; it didn't work out that well, but there was a chance there. (Laughs) I didn't allow my mental game to be a priority going into that fight. I got into my head and I got my face smacked up for it.”

A visit to the doctor after the fight showed that he got his face smacked up before it, too, as it was revealed that he went into the bout with a broken nose. Oh yeah, there was that broken toe that he did know about, as well. 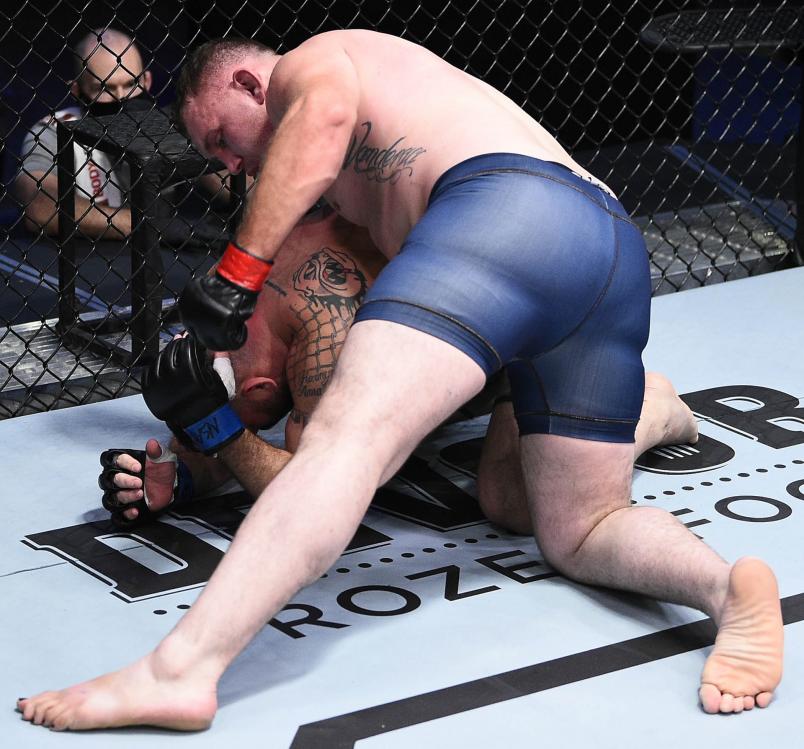 Getting it done in round 1, Dana White's Contender Series November 04, 2020 (Photo by Chris Unger/DWCS LLC/Zuffa LLC)

“I was wrestling, and his shin bone hit my toe,” Vanderaa said. “My foot went one way, my toe decided to see other people.”

Wow, maybe I should break my rule about not asking fighters how training camp is going. You know, because they usually won’t tell you the truth.

“Oh, I would tell you,” Vanderaa said. “I'm over this camp already.”

He laughs, and while he had more of than enough of this training camp, it’s over now. All he has to do is fight Justin Tafa on Saturday. And that, he can get onboard with.