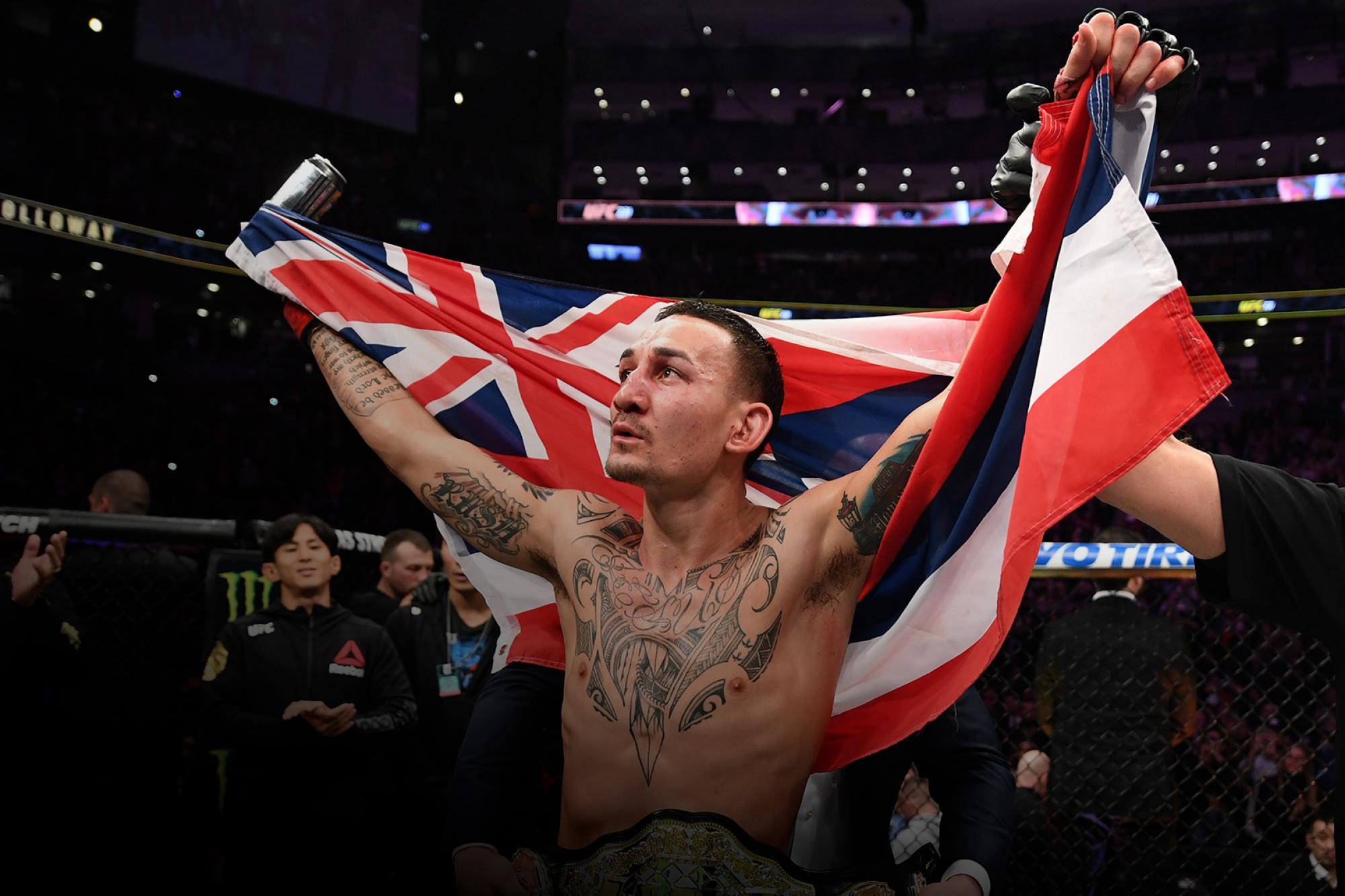 In Max Holloway’s second title defense against Brian Ortega at UFC 231, he landed a record 290 significant strikes in a dominating performance. Afterward, some anointed him as the greatest featherweight ever. “Blessed” quickly refuted that, saying he has much more to do before passing Jose Aldo, whom he beat twice.

What he thought “more” meant was a title defense in the summer, but when the UFC approached with a shot at the interim lightweight belt against Dustin Poirier, he couldn’t say no.

While achieving “champ champ” status is always a questions hovering around titleholders, Holloway isn’t necessarily focused on putting another strap on his shoulders.

“The belt is the belt, you know?” Holloway said. “I’m not here to fight for belts. I’m here to fight the toughest guy. My son, Rush, doesn’t know how many belts I have. I put them in the closet. They can come out after I’m done fighting, but right now, we’re trying to focus on being the best fighter, and I told UFC – it’s as simple as this – I told UFC, ‘Send me the hardest fights,’ and this is what they did.”

The matchup calls back to Holloway’s UFC debut, a first-round submission loss to Poirier at UFC 143, years before he started his 13-fight winning streak that rocketed him to his current heights. When asked about the fight, all Holloway remembers is the nerves he carried into the Octagon.

“The number one thing I remember from that Dustin fight was telling myself not to feint when Bruce Buffer was announcing me in the fight,” he said. “That’s about it. I remember walking out and everything. My coach was like, ‘Stay calm. Stay calm. Stay calm.’ The boy went 200 miles per hour once they told me to start walking.”

Rewatching that fight is entertaining for several different reasons. Both men obviously had the signs of early talent, even if everything they threw was a little less polished than it is now.

They also have far fewer tattoos.

The point is: there isn’t much to take from that fight into this fight, and they’re focused on their upcoming matchup in Atlanta.

By moving up though, it begs the question about what Holloway plans to do at featherweight. Currently, he says his plan is to bounce up and down between the divisions as long as the matchup intrigues him. If everything goes well for him on April 13, defending both belts isn’t out of the question, but what he doesn’t want to do is hold up the featherweight division in the meantime.

The fight will be Holloway’s first in Atlanta, though he spent time in the city while filming Den of Thieves. He remembers the city fondly, saying they have “some bomb grits” while also adding his excitement to get out of the hotel and try more of what Atlanta has to offer in terms of food.

During UFC 231, Holloway adopted Toronto as the “10th Island” (Hawaii has eight islands, and Las Vegas is often referred to as the “9th Island”). He didn’t say whether he plans to make Atlanta the “11th Island,” but he did admit that it sounded like a fun idea to “keep racking them up.”

Either way, the fight with Poirier is dripping with narratives. From extending his winning streak to avenging his debut loss to adding even more talent into the shark tank that is the lightweight division, Holloway is well-positioned to add to his already-stacked resume.